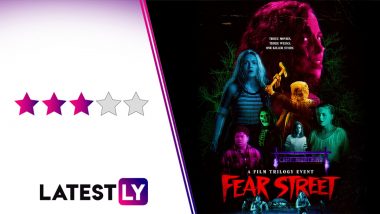 Fear Street Part Two - 1978 Movie Review: Netflix has found its new conversation-starter among the geeks and horror afficianadoes with the Fear Street trilogy. Based on the works of the famed author RL Stine and directed by Leigh Janiak, Fear Street is three movies set in three different time-periods interlinked by a spooky, gruesome mystery and connecting characters. The first film Fear Street: Part One - 1994 turned out to be a gory but enjoyable fare with some likeable characters, smart writing and a love story worth rooting for. Now with Fear Street: Part Two - 1978, we are entering straight into the killing arena that Jason Voorhees enjoyed quite a lot. Fear Street Part One - 1994 Movie Review: Netflix’s Horror Flick Is a Fun Throwback to Retro-Slasher Films.

The troubles for Shadysiders has been going on for centuries, and 1978 is no different, making me wonder why this place hasn't been abandoned and turned into a ghost town. Watching Stranger Things for merely three seasons, had raised that question in us, and the residents of Hawkins have only suffered paranormal stuff for merely three years, with most of them being clueless. Not the case with Shadyside, though.

The curse of the town lends itself to Camp Nightwing, a summer camp for teens of Shadyside and Sunnyville. Shadysiders continue to be taunted and bullied by the vain Sunnyvillers, who revel in the fact that they are free from the curse. But no one is more tormented by the bullies than Ziggy (Sadie Sink), a teenage Shadysider with enough angst problems. Her elder sister, Cindy (Emily Rudd) is also part of the camp, and both siblings share icy vibes with each other over their family woes. Cindy is also estranged with her rebellious former friend Alice (Ryan Simpkins), who is also part of the camp.

However, they soon have to team together to fight for their own survival. The grisly powers of the accursed witch Sarah Fier rise that night, through Cindy's perfect boyfriend Tommy Slater (McCabe Slye) who is turned into an unemotional undying killer.

The whole movie is narrated by one of the sisters who survived the night, played by Gillian Jacobs, to the survivors of the first film, Deena (Kiana Madeira) and Josh (Benjamin Flores Jr). As to who that sister is, well, it's not really very hard to guess. From Jaws to Evil Dead, 11 Lesser-Known Hindi Remakes of Cult Hollywood Horror Movies to Watch Purely for Guilty Pleasures!

Like the first film, Fear Street: Part Two - 1978 is an ode to the retro horror slasher movies, and has plenty of grisly and gory kills, pulpy, tense moments and this time, nudity as well. Fans of movies like Friday the 13th and Halloween know how these tropes are quite symbiotic to the films in that genre. When it comes to bloodshed, the movie leaves no holds barred, as neither kids or more mature teens are spared from the axe of its killer. It is definitely a curse to be a Shadysider!

Like the first film, however, what makes Fear Street: Part Two - 1978 a bit different from its cheesy inspirations, is the bonding between the main characters. Be it with Cindy and Ziggy, or Cindy and Alice, the movie is best when the main characters repair their bond in the face of, well, fear. However, the blossoming romance between Ziggy and Sunnyville camp counsellor Nick (Ted Sutherland) - who as we know, becomes the Sheriff Nick Goode (Ashley Zukerman) from the first film - feels rushed, but watchable for the chemistry between the actors.

A major problem that made Fear Street: Part Two - 1978 felt underwhelming in comparison to the first movie is that, save for the survivor's identity (which isn't very hard to guess), we know how things will turn out beforehand. The predictability factor is high compared to its predecessor, the latter felt surprising on many turns. Also, while I appreciate the Easter Eggs and inspiration, Fear Street: Part Two - 1978 veers way too close to the territory it is trying to ape in its gratuitousness and nearly losing its identity in the process. That said, credit must go for the water-tight pacing, its retro set-design and splendid camerawork for maintaining that spooky feel throughout.

- The Cast and Characters

- Veers Way Too Close to its Inspirational Territory

- Predictable in Its Outline

Fear Street: Part Two - 1978 may not be as good as the first part-er, but it serves enough thrills and kills to satiate the gorehounds. The movie is streaming on Netflix, with Fear Street: Part Three - 1666, the final part, arriving on the platform on July 16.

(The above story first appeared on LatestLY on Jul 13, 2021 05:43 PM IST. For more news and updates on politics, world, sports, entertainment and lifestyle, log on to our website latestly.com).