Harrison Ford recently made an announcement that he will star in the upcoming movie of Indiana Jones 5 which is set to be released on June 30 of next year. The star made a special appearance at the Star Wars Celebration and revealed the news to fans. 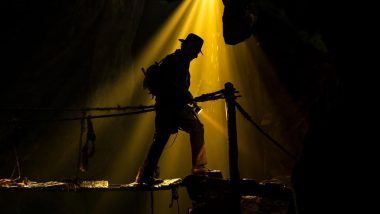 Hollywood star Harrison Ford will soon be seen in the fifth installment of Indiana Jones which is set to debut in theatres on June 30, 2023. The actor appeared at the Lucasfilm panel at Star Wars Celebration to make the announcement, reports Deadline. Indiana Jones 5 Finally Wraps Up Filming After Multiple Delays; Movie to Release on June 30, 2023.

He told the crowd that the film is almost done and will again feature the music of John Williams. As per Deadline, Williams joined the event to conduct a live orchestra in his Indiana Jones theme before Ford was introduced.

Taking over from Steven Spielberg, James Mangold is at the helm for Indiana Jones 5 with Jez Butterworth and John-Henry Butterworth. Mangold is also co-writing the script. No plot details have been revealed so far. However, Ford, Mangold and executive producers Kathleen Kennedy and Frank Marshall did reveal a first photo from the movie.

In 2023, Harrison Ford returns as the legendary #IndianaJones. Check out this first look of the new James Mangold-directed film. pic.twitter.com/ALs82tsmXw

(The above story first appeared on LatestLY on May 27, 2022 05:27 PM IST. For more news and updates on politics, world, sports, entertainment and lifestyle, log on to our website latestly.com).