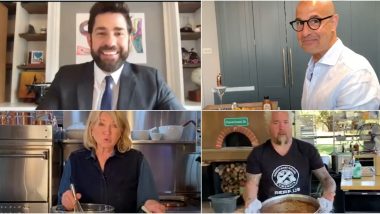 With coronavirus putting everything on hold all celebrities quarantining in their homes, the lockdown has been time when celebs have been their creative best. Given that the crisis has brought enough gloom and doom everywhere, actor John Krasinski is doing his bit to spread some smiles and positivity amid this situation with his amazing YouTube show, Some Good News. After making the first episode of the show special by celebrating The Office's 15th anniversary and inviting co-star Steve Carell on it, SGN seems to be getting better and better every week. If Brad Pitt making an appearance on the show as a 'Weather man' was any less, Krasinski also managed to bring The Jonas Brothers for a virtual prom on the show.

In the new episode, Krasinski went from last week's virtual prom to virtual potluck. Guests on the new episode included culinary geniuses Martha Stewart, Guy Fieri,David Chang. Actor Stanley Tucci who is the beloved 'mixologist' for the American audiences also appeared on the episode and also served an amazing "Quarantini". Martha Stewart also praised a four-generation-strong pierogi recipe as close to her own grandmother's during this episode. Well, it did seem like one successful celeb virtual potluck and we'd sure love to see some more. John Krasinski and Steve Carell Reflect On The Office's 15th Anniversary, Share Their Favourite Moments in a Surprise Reunion (Watch Video).

After making the amazing drink, in the end, a delighted Tucci concludes saying, “This is delicious! Cheers to both of you.” Tucci has been in the news ever since he posted a negroni-making video to his Instagram that managed to get up to 800,000 views. In the video, we see Tucci fixing up the classic Italian cocktail for his wife, explaining how to make it. Well, looks like now his 'Quarantini' video is equally going to get some love from his fans.

(The above story first appeared on LatestLY on Apr 27, 2020 03:28 PM IST. For more news and updates on politics, world, sports, entertainment and lifestyle, log on to our website latestly.com).