As per reports, the female caller can be heard saying that Depp had allegedly hit her, ripped out her hair and attempted to suffocate her. 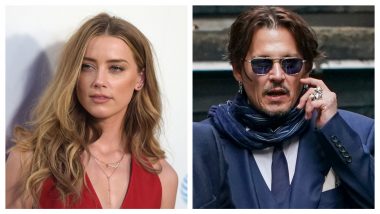 Whoever said celebrity spats are not ugly didn't follow the Johnny Depp-Amber Heard case. The former couple have been in a legal battle after filing for separation and till now, there have been reports suggesting accusations of abuse on both sides. In a fresh development, a 911 call a friend of Amber Heard’s allegedly made to report the actress’ marriage-ending 2016 fight with Johnny Depp was published on Monday. As per reports, the female caller can be heard saying that Depp had allegedly hit her, ripped out her hair and attempted to suffocate her. Johnny Depp Finally Debuts On Instagram Amid Coronavirus Crisis, Thanks His Fans For The Support (View Posts).

While Heard's attorney says phone records and police department logs vindicate Heard’s account of facing domestic violence which led her to file for divorce, Depp's attorney has maintained that it is a "hoax". Speaking to DailyMail, he said, “Quite simply this was an ambush, a hoax. They set Mr Depp up by calling the cops but the first attempt didn’t do the trick.”

The 911 call recording seems to have been submitted as evidence in the $50 million defamation lawsuit Depp filed against Heard in Virginia. For the uninitiated, Heard was sued by her ex-husband, Depp over a Washington Post op-ed she wrote in 2018 where she termed herself a victim of domestic abuse. Depp until now maintains that he never physically assaulted her in the course of their marriage. The Rum Diary co-stars were married for just over a year before they separated in May 2016.

Depp's legal team have maintained that the actor was seen on a surveillance video leaving the apartment at 8:29 pm and knew nothing about Heard's alleged injuries. According to his legal rep, Depp had no knowledge of such an incident until Heard filed for a restraining order six days later and also attended court hearing with a bruised face.  Aquaman 2: Is Amber Heard Getting Replaced from the DC Film Due to Johnny Depp Controversy?

The Amber Heard-Johnny Depp case sure seems to be getting uglier by the day. Recent reports also suggested that Heard cheated on Depp with SpaceX CEO Elon Musk which the latter has clearly refuted.

(The above story first appeared on LatestLY on Apr 28, 2020 03:19 PM IST. For more news and updates on politics, world, sports, entertainment and lifestyle, log on to our website latestly.com).