Aquaman 2: Is Amber Heard Getting Replaced from the DC Film Due to Johnny Depp Controversy?

After starring in the first film as Mera alongside Jason Momoa, it looks like Heard may either be replaced or have a much smaller role than before in the sequel. 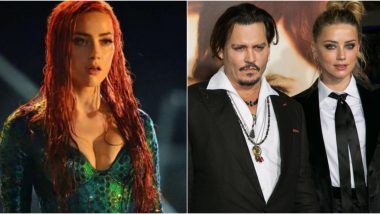 Amber Heard's personal life has been hitting the headlines since a while now relating to her divorce with Johnny Depp. Unlike several other divorces and separations we have seen in Hollywood, the Heard-Depp divorce is way more complicated with cheating and abuse allegations. Although it looks like this controversy may be costing Heard her Hollywood career. If recent reports are to go by, Heard's role in DC's Aquaman sequel may be in trouble. After starring in the first film as Mera alongside Jason Momoa, it looks like Heard may either be replaced or have a much smaller role than before in the sequel. Elon Musk Unfollows Pregnant Girlfriend Grimes on Twitter After Johnny Depp Alleges Amber Heard of Cheating On Him With the SpaceX CEO.

As reported by We Got This Covered, there's also buzz that Game Of Thrones star Emilia Clarke is being considered to replace Heard although nothing is confirmed yet. It all started after fans of Johnny Depp signed a petition to remove Heard from Aquaman franchise after audio recordings of their heated arguments were made public by Daily Mail. In the tapes, Heard taunted Depp saying that no one would believe that he’s a victim of domestic abuse.

It looks like the internet reactions and the petition has led Warner Bros into thinking if they can either reduce Heard's role in the film or replace her. Given that the film is all set to begin shooting next year, the studios have ample of time to make the final decision. Not long ago, Amber Heard's allegations of domestic abuse on Depp which led Disney to drop Johnny Depp from the Pirates Of the Caribbean franchise. It looks like the same may be happening with Heard now. Winona Ryder Defends Ex-fiance Johny Depp Against Amber Heard's Accusations: 'He Has Never Been Violent Or Abusive Towards Anybody I Have Seen'.

The Aquaman actress recently hit the headlines for leaked pictures showing her cuddling SpaceX CEO Elon Musk in Depp's private penthouse elevator. Johhny Depp has alleged that Heard cheated on him with Musk while they were still married.

(The above story first appeared on LatestLY on Mar 31, 2020 05:12 PM IST. For more news and updates on politics, world, sports, entertainment and lifestyle, log on to our website latestly.com).