Not just acting but Bates also showed her talent in direction. She holds to her name, directing credits for several episodes of the HBO television series Six Feet Under (2001–03) and the television film Ambulance Girl (2005). 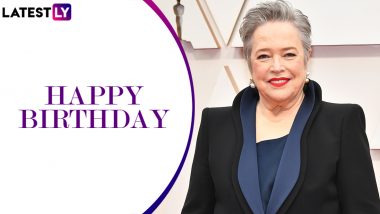 Kathy Bates is one of the finest Hollywood actresses who has put up excellent performances in films as well as TV series. The actress began her career with major roles in theatre and later moved on to Television and films. Bates' talent is such that even in supporting roles, she makes her mark. Who can forget how lovely her act was in Titanic as Molly Brown. Her other popular works include Dolores Claiborne (1995), The Waterboy (1998), About Schmidt (2002), and Richard Jewell among others. Not just acting but Bates also showed her talent in direction. She holds to her name, directing credits for several episodes of the HBO television series Six Feet Under (2001–03) and the television film Ambulance Girl (2005). Home Alone Star Macaulay Culkin Will Have a 'Crazy Erotic Sex' Scene With Kathy Bates on American Horror Story 10, Says Ryan Murphy.

As the actress celebrates her birthday on June 28, we look at some of her best films. In her career, Bates has won a lot of accolades including an Academy Award for best actress. She bagged the best actress honour for her role in Misery. Bates' television work too has been immensely impressive and hence her win has resulted in 14 Emmy Award nominations which is huge. Here's looking at her best films on her birthday.

Bates starred as an obsessed fan in this film who happens to come across her favourite writer after a serious car wreck. Her character is then seen holding him captive in her remote farmhouse. The film has one of Bates' best performances.

This psychological thriller drama directed by Taylor Hackford and starring Kathy Bates, Jennifer Jason Leigh, Christopher Plummer and David Strathairn is based on Stephen King's novel by the same name. This gripping movie is oa must-watch for Kathy fans.

Sure, Kathy played a supporting role in this film but she was unforgettable as the 'unsinkable Molly Brown'. She brings the lighter movements in the film and is amazing as the loud, uncouth 'new money' member among the First-class. Her lending her son's gorgeous suit to Leonardo DiCaprio's character is the cutest scene from the film.

The American comedy-drama film written and directed by Alexander Payne, starred Jack Nicholson in lead. Bates played Roberta Hertzel in the film, a whimsical free-spirit who loves her pain meds and skinny dipping in her hot tub.

There are several other films where Bates has shown what a great talent she is including the likes of P S I Love You and many more. Do tell us your favourite Kathy Bates films in comments below.

(The above story first appeared on LatestLY on Jun 28, 2020 09:48 AM IST. For more news and updates on politics, world, sports, entertainment and lifestyle, log on to our website latestly.com).