Reality TV personality Kris Jenner has praised her son Rob Kardashian for his parenting skills. Kris spoke about Rob during an interview with Cheryl Burke and AJ McLean, and talked about how he handled parenthood, reports aceshowbiz.com. 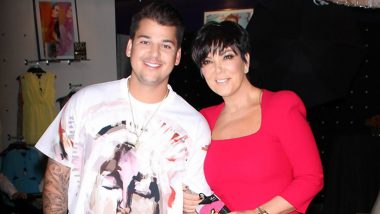 Reality TV personality Kris Jenner has praised her son Rob Kardashian for his parenting skills. Kris spoke about Rob during an interview with Cheryl Burke and AJ McLean, and talked about how he handled parenthood, reports aceshowbiz.com. "He's so good. He is so good. He's really great," Kris told Burke and McLean during the "Pretty Messed Up" podcast.  Kris added: "His daughter Dream is great and he's so in love with that kid. Kendall Jenner Throws Star-Studded Halloween and Pre-birthday Bash Despite the COVID-19 Pandemic, Faces Criticism on Social Media As Pics & Videos From the Party Go Viral

He's such a great dad. You never know, you have kids, they grow up, they have their kids, and you just don't know how somebody's going to be as a parent but he's just… wow." Burke agreed with Kris, describing ROb as someone who has always been a caretaker. "I was his teacher but he always made sure I was OK. He's a very sweet soul that guy," she said. Kris also spoke of Rob and Burke's dance on "Fly Me To The Moon" that he dedicated to his late father Robert Kardashian. Kylie Jenner Posts Mushy Pictures with Beau Travis Scott But Her Sheer Givenchy Outfit Has Our Attention

"Every time I hear the Frank Sinatra song, I cry. Every time it comes up on the radio, it takes me back to that moment in the ballroom when you guys were dancing to that song and I'll never forget the joy that I felt. Here's my kid, out there dancing and nailing it in front of what - 20 million people?" said Kris. Rob shares his daughter Dream with model Blac Chyna.

(The above story first appeared on LatestLY on Nov 04, 2020 07:18 PM IST. For more news and updates on politics, world, sports, entertainment and lifestyle, log on to our website latestly.com).