The Leonardo DiCaprio Foundation aims to reduce the impact of humans on the environment and protect the world's last wild places. 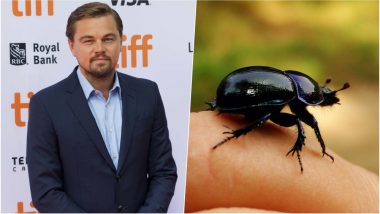 The Grouvellinus leonardodicaprioi beetle was discovered at the bottom of a waterfall in Maliau Basin, a remote nature reserve in Borneo, reports femalefirst.co.uk.

It was found by Taxon Expeditions, a firm set up to help untrained volunteers discover new species and the expedition was funded by the 'Inception' star's foundation. After finding three new species of water beetle, the participants voted to name one of them after DiCaprio.

Iva Njunjic, founder of Taxon Expeditions, said: "Tiny and black, this new beetle may not win an Oscar for charisma, but in biodiversity conservation, every creature counts."

The Leonardo DiCaprio Foundation aims to reduce the impact of humans on the environment and protect the world's last wild places. It has awarded over $100 million in grants since 2010.

Other celebrities to have insects names after them include actress Kate Winslet, who too has a beetle named after her. The Scaptia beyonceae horsefly was named after singer Beyonce because of its dense golden hair, and the Gnathia marleyi is a parasite that feed on fish in the Caribbean, named after late reggae singer Bob Marley.

(The above story first appeared on LatestLY on May 01, 2018 03:38 PM IST. For more news and updates on politics, world, sports, entertainment and lifestyle, log on to our website latestly.com).