Lionsgate to Launch ‘Twilight in Concert’ World Tour in August

"Twilight" is the third Lionsgate movie to receive a concert tour following "The Hunger Games in Concert" and "La La Land in Concert". 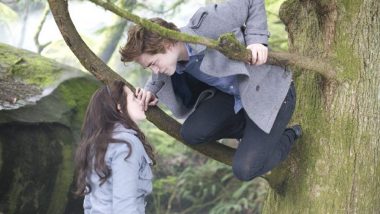 Twilight saga getting a film-concert tour

Los Angeles: "Twilight" saga will be back, this time as a live concert that will tour the world. The hit movie franchise, based on Stephenie Meyer's book series, is getting a film-concert tour just like Lionsgate properties "The Hunger Games" and "La La Land", reports variety.com. Lionsgate is launching the "Twilight in Concert" world tour in August in Brazil, followed by stops in Australia and the UK. The event will feature a full orchestra performing Carter Burwell's original film score timed to a screening of "Twilight", the 2008 romantic fantasy that launched the highly successful five-film franchise that hauled $3.3 billion worldwide. Robert Pattinson Reveals His Current Relationship Status with Ex-girlfriend Kristen Stewart

"Twilight" is the third Lionsgate movie to receive a concert tour following "The Hunger Games in Concert" and "La La Land in Concert". Those tours have accounted for more than 100 performances in 25 countries to date. "We are thrilled to launch another live-to-film tour in the footsteps of our ‘Hunger Games' and ‘La La Land' international concert events," said Lionsgate's Jennifer Brown. Robert Pattinson Ready To Reprise His Role As Edward Cullen In Twilight Series! Read Quote

"The combination of Meyer's brilliant storytelling, Burwell's musical genius, and a truly legendary underlying film and book property will continue to expand the world of ‘Twilight' and introduce it to legions of new fans around the world." The original "Twilight", starring Kristen Stewart and Robert Pattinson, was directed by Catherine Hardwicke from a screenplay by Melissa Rosenberg.

(The above story first appeared on LatestLY on May 03, 2019 03:37 PM IST. For more news and updates on politics, world, sports, entertainment and lifestyle, log on to our website latestly.com).