All About That Bass hitmaker Meghan Trainor has opened up about her mental health struggles, saying that she suffered her first panic attack live on television. 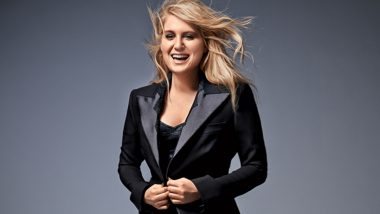 All About That Bass hitmaker Meghan Trainor has opened up about her mental health struggles, saying that she suffered her first panic attack live on television. The singer was on 'CBS This Morning' with Gayle King ahead of announcing the 2017 Grammy nominees when she started "vibrating" and felt she was "dying", reports femalefirst.co.uk. Meghan Trainor to Headline NBC’s Upcoming Comedy.

Trainor said: "I was announcing the nominees, and I was vibrating. I felt like I was going to pass out on live television. I was like, 'What's happening? I must be dying.' "As soon as they said 'Cut,' I went offstage and was [gasping for air] in front of everyone." Meghan - who welcomed her first child, son Riley, into the world in February - has praised TV presenter Gayle for helping her in the scary situation. Meghan Trainor and Husband Daryl Sabara Welcome Their First Child Together, Couple Name Their Newborn Son ‘Riley’ (See Pics).

She said: "Gayle was my email buddy after that and always checked in on me. I was so embarrassed and apologised, but she made everything so much better for me. She's an angel on this earth." Trainor was later diagnosed with panic disorder. She told people.com: "Some nights I remember I ate a bunch of food, then I got scared, and I was like, 'I need to go to the emergency room because I'm allergic to what I just ate.'

"The doctor came in, looked really sad, and was like, 'Have you ever heard of a panic attack?' "I was like, 'No, no, no, I'm having an allergic reaction. If you just look in the back of my throat, it's closing.' That was my first lesson on what a panic attack can do to you." Last year, the 'Dear Future Husband' crooner said that she was using music to "help with (her) mental health", during the early stages of the pandemic.

(The above story first appeared on LatestLY on Sep 23, 2021 09:31 PM IST. For more news and updates on politics, world, sports, entertainment and lifestyle, log on to our website latestly.com).