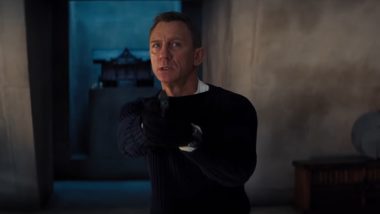 No Time to Die marks Daniel Craig’s final outing as James Bond. After years of saying he is done with the role, it looks like this time that sentiment is going to stick after all. Seeing James Bond retired, he is forced to go back into duty as a new world ending threat arrives. No Time to Die was a thrill from start to finish and one that ended on a really emotional note. No Time To Die Movie Review: Daniel Craig’s Final Outing as James Bond 007 is an Absolute Delight (LatestLY Exclusive).

Of course it’s a surprise to hear that a James Bond film ended on an emotional note which is quite unusual. For many, Daniel Craig is the definitive version of Bond, and many will surely be left in tears over here. So what exactly happens in the ending of No Time to Die? Well that’s what we are here to talk about.

After successfully opening all the silo doors for the missile to destroy the island, Bond gets ambushed by Safin. After a brief skirmish, Safin infects Bond with the nanobots that have Madeleine’s DNA imprinted on them. An injured Bond finishes off Safin and gives up on escape as he knows he can never be with Madeleine. In his final moments he talks to Madeleine through an earpiece and tells her how much he loves her and their daughter and says his final goodbye. The missiles hit the island which results in Bond’s death. A few weeks later M, Q, Moneypenny, Tanner and Nomi gather at MI6 headquarters to remember Bond. Back at Matera, Madeleine starts telling Mathilde (her and Bond’s daughter) the story about a man named James Bond.

After the credits, we are shown a photo saying that "James Bond Will Return", confirming that the character will return to the big screen. So while Daniel Craig may not return for the role, MGM is now free to cast anyone in the character. We have already seen Lashana Lynch being 007 when Craig's Bond goes into retirement. What if they also treat the name James Bond - already a popular fan theory out there - as a code name for the agent. No Time To Die Box Office: Daniel Craig’s Bond Film Opens to $119 Million Overseas.

Writing this, I still can’t believe that they killed off James Bond. In my opinion it was still a good decision and capped off Craig’s run in a great way. Whoever the next Bond will be, has some really huge shoes to fill in just because of how great Daniel Craig’s run as the character was.

(The above story first appeared on LatestLY on Oct 21, 2021 05:59 PM IST. For more news and updates on politics, world, sports, entertainment and lifestyle, log on to our website latestly.com).