No Time To Die Makers Talk About Finding Next James Bond After Departure of Daniel Craig, Says ‘Will Start Thinking About the Future Next Year’ 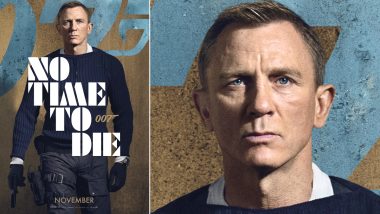 Barbara Broccoli and Michael G Wilson, the producers behind James Bond spy series, said they won't discuss who will take over the long-running film franchise following the departure of Daniel Craig until 2022. The makers are looking forward to the release of "No Time To Die", which stars Craig in his fifth and final appearance as the British MI6 agent. The film, which is set to have its world premiere at London's Royal Albert Hall on Tuesday, is directed by Cary Joji Fukunaga. No Time To Die Release Date: Daniel Craig's Bond Film to Hit Theatres on October 8.

Broccoli and Wilson, half-siblings and heads of Bond outfit Eon Productions, talked about the future of the film series in an appearance on BBC Radio 4's popular Today programme on Monday morning. Asked if they have decided who might replace Craig in the franchise, Broccoli said, "Oh God no. We're not thinking about it at all. We want Daniel to have his time of celebration. Next year we'll start thinking about the future." No Time to Die Final Trailer Out! Daniel Craig's James Bond May Face His Biggest Foe in Rami Malek's Mysterious Safin (Watch Video).

Wilson said Craig, who has played Bond for 15 years starting with 2006's "Casino Royale", has played the character so well that it almost seems impossible to find his successor. "He's been such a great Bond. Those are big shoes to fill. I can't even (think if it's) possible," he added. Wilson added Craig has "changed" the series, based on the character created by author Ian Fleming, and would always be a "big part" of its history. Broccoli said Craig is a "tremendous actor" and they were lucky to get him to play this role.

"We could see he was reluctant to do it, because he knew it would change his life, which it obviously has. It's changed his life, but it hasn't changed him. What he's enabled us to do with the franchise is really explore the emotional life of Bond and go into the person and complexity and conflicts that happen within the Bond character," she further said. Earlier this year, Amazon Studios acquired MGM, the parent company of Eon, for a purchase price of USD 8.45 billion and Broccoli said the Bond franchise will continue under the new deal.

"We'll keep going. Next year it'll be the 60th anniversary of the Bond films, so we're looking forward to the new chapter, whatever it brings. We're not quite sure at the moment. Right now, we just want to celebrate 'No Time to Die' and Daniel's extraordinary achievement," she added. Betting company William Hill's top favourites to play the next Bond includes the likes of Tom Hardy, Rege-Jean Page, James Norton, Luke Evans, Idris Elba and Henry Cavill. "No Time To Die", the 25th film in the Bond series, also stars Lea Seydoux, Rami Malek, Lashana Lynch, Ana de Armas, Ben Whishaw, Naomi Harris, Jeffery Wright, Christoph Waltz, and Ralph Fiennes.