The livestream fundraiser marked the organisation's second consecutive year going virtual after the pandemic derailed plans to invite guests to the gala. 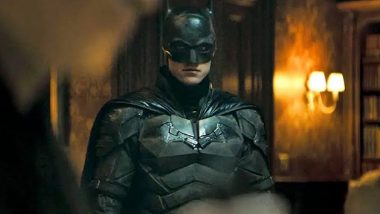 Hollywood star Robert Pattinson co-hosted the 15th annual Go Gala event supporting the Go Campaign alongside fellow Go Global ambassadors Ewan McGregor, Lily Collins and the organisation's founder and CEO Scott Fifer. The livestream fundraiser marked the organisation's second consecutive year going virtual after the pandemic derailed plans to invite guests to the gala. Instead, Pattinson, Collins and Fifer emceed from Cornerstone Plaza in Los Angeles, which 'The Batman' star relished. Gal Gadot Reveals She Is ‘Happy’ To Have Robert Pattinson As the New Batman and Zoë Kravitz As Catwoman in DC Universe.

"It's far less awkward than being alone and broadcasting virtually," Pattinson told Variety. "But of course, nothing compares to hosting the gala in person with everyone together in the same room." Since 2015, the actor has served as a global ambassador for the organization - which supports grassroots projects that bring direct relief to children in need of education and vocational training, medical care, enrichment programs, and basic human rights. And at the end of the virtual fundraiser, Pattinson surprised Go Campaign supporters with a special treat. The Batman: Impressed by the Hallway Fight Scene in Robert Pattinson’s Movie Trailer? Check Out 7 More Such Awesome Scenes That Came in the Past!.

On December 14, via 'The Batman' and the Go Campaign social channels, Pattinson will reveal how one lucky winner (and a guest) can win a trip to the premiere of the superhero movie in early 2022. The actor got to work negotiating behind the scenes and surprised the Go Campaign team with what he'd been cooking up just days before the event.

"Can you imagine our reaction?" Fifer exclaims. "We cannot wait!" Though Pattinson may be suiting up as a superhero for the first time in 'The Batman', the folks behind the Go Campaign have always considered the actor to be pretty heroic. Fifer shared that Pattinson's fans have raised $260,000 for the organisation's causes, including funds which have been used to build a school for girls in Cambodia.

Fifer added: "Rob rallies his incredible network of friends to support us and make big things happen for kids around the world." For example, Pattinson brought Collins to her first gala in 2016 and recruited Sia to perform during this year's live stream. "Even with the best laid plans, it's always a mad rush just before the gala - everyone's so busy, but luckily great friends pull through at clutch moments," Pattinson says of playing talent booker, in addition to co-host.

"So, thank you Sia and The Chandeliers again for that." The line-up for the 2021 Go Gala event, which was free to all and is available to replay on gogala.org, also featured special performances from Jewel, MILCK and Levi Evans. Fifer added that event publicist Chet Mehta's PR team brought in Jewel and MILCK, while Levi Evans is the son of longtime GO supporters Morleigh Steinberg and U2's The Edge.

McGregor, appearing virtually, beaming in from the Virginia location of his next project, employed his partner Mary Elizabeth Winstead for a special acoustic performance of 'If I Needed You'. Kaitlin Olson and Glenn Howerton made a special appearance, while the organization's newly appointed Board of Changemakers - young Hollywood actors dedicated to using their platforms for good, including Minka Kelly, Brandon Flynn, Max Carver, Alex MacNicoll, Torrance Coombs, Abigail Cowen and Geraldine Viswanathan - also lent their voices to the cause.

The Go Campaign team targeted a fundraising goal of $1 million, with all the money raised going to support global pandemic relief efforts, racial justice initiatives for youth in the US and education for at-risk children in Africa and Latin America and for girls in Afghanistan. Nearly 6,000 people from across the globe tuned into Saturday night's livestream event via YouTube or Twitter.

The distance certainly didn't stop the audience from participating. Through live donations made during the gala, and more in the days since, the Go Campaign is halfway to their goal, raising more than $550,000 to date. "I was amazed at how quickly we were able to raise money once (event sponsor) Beachbody Foundation announced that they'd match up to $100K, if we could raise it in the next 30 minutes," Fifer recalls.

"We raised it in 14 minutes." Pattinson was equally impressed by the virtual engagement, adding that "one of the benefits of doing it live online was being able to actually see the reach vs. at the gala when everyone is in the same room." "The most moving part of every Go Gala for me is seeing people around LA - and around the world now that this is the second virtual gala - come together to support Go Campaign and the children that Go supports," he continues.

"I am always amazed by the generosity, dedication, and passion of the donors." For Fifer and his team of just 10 people, the success of the Go Gala mirrors the evolution of the organisation. "What started with one small orphanage in Tanzania has grown to global impact," Fifer says, marveling over the progress. "I started this organization to help a group of 20 orphans in Kilimanjaro and, over the past 15 years, we have improved the lives of over 188,000 children. We work in 37 countries with 174 local heroes, and we've had 520 projects."

Pattinson finds the organisation's growth to be "galvanising". "Everyone has always been tremendously focused and driven to enact meaningful change," he says of the Go Campaign team (made up of only 10 full-time employees. ."It's inspiring to see the number of projects and scale of their achievements increase exponentially each year. The energy grows with each new project that they are able to green light." Supporters can help Go Campaign reach their $1 million goal by donating or bidding on items from the silent auction.

(The above story first appeared on LatestLY on Oct 28, 2021 09:31 PM IST. For more news and updates on politics, world, sports, entertainment and lifestyle, log on to our website latestly.com).