Ruby Barker Reveals She Was Recently Hospitalised Due to Mental Health Struggles, Says ‘Stop Being So Hard on Yourself’ (Watch Video)

Although she declined to name her specific diagnosis in the video, she promised to engage in a longer conversation about her mental health in the future. She also thanked her friends and mentors, along with Netflix and Bridgerton executive producer Shonda Rhimes. 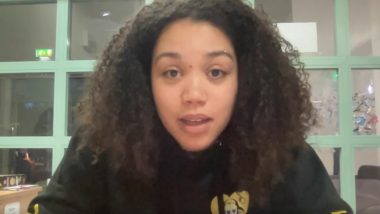 British actress Ruby Barker, who is known for her work in the historical-romance streaming series Bridgerton, was recently hospitalised following her struggle with mental health issues. The actress shared the news with her followers through a video which she posted on her social media, reports Entertainment Weekly. The Box: Divya Agarwal Opens Up About Her Upcoming Short Film on Mental Health.

Barker, who plays Lady Maria Crane (nee Thompson) on the Netflix hit show, told her followers that she was being discharged from the hospital after being "really unwell for a really long time" and urged viewers to be gentle with themselves if they're also struggling.

"Stop being so hard on yourself," the 25-year-old actress said. "Sometimes you've just got to take a break and you've got to say, 'I just can't do this right now. I need support.'" As per Entertainment Weekly, Barker said that she doesn't want her diagnosis to be a self-fulfilling prophecy. "I want to survive, and I will survive," she said. "I'm going to. And so are you."

Although she declined to name her specific diagnosis in the video, she promised to engage in a longer conversation about her mental health in the future. She also thanked her friends and mentors, along with Netflix and Bridgerton executive producer Shonda Rhimes. Camila Cabello Shares How Writing Cinderella Song 'Million to One' Helped Her Mental Health.

"You are all holding me up and holding me together," she said. Entertainment Weekly further states that she thanked Rhimes in particular for "saving" her through the role of Marina, an unwed pregnant woman determined to secure a future for herself and her children.

In 'To Sir Phillip With Love', the Julia Quinn book upon which Barker's character is based, Marina Crane is said to have struggled with severe depression, although the Netflix show has not yet reached that portion of the story and could go in a different direction like it has with several other book-based storylines.

Barker concluded the video with advice for her fans. "Be kind to yourself. Be gentle," she said. "But also learn and understand what that truly means." She then signed off by singing part of "Waiting on a Better Day" by Sexton, her favourite musician.

(The above story first appeared on LatestLY on May 29, 2022 01:39 PM IST. For more news and updates on politics, world, sports, entertainment and lifestyle, log on to our website latestly.com).