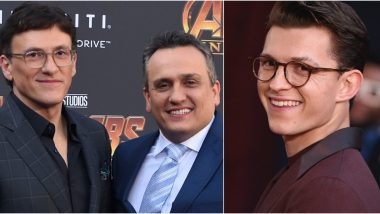 Avengers:Endgame directors Joe and Anthony Russo recently launched a weekly Instagram Live show to discuss a range of classic movies and well, we have to say it is a blessing for the new-gen who definitely need to learn about the best of cinema from these. With coronavirus pandemic creating havoc outside, the Russo Brothers' show ‘Russo Bros. Pizza Film School‘ has been an enjoyable watch during the quarantine. Recently, in an interview where the duo were discussing the same, the directors revealed a rather interesting detail about Tom Holland. Spider-Man: Homecoming Star Tom Holland Decides to Self-Isolate After Feeling ill Amid Coronavirus Scare.

During their recent interview, Russo brothers revealed how they schooled a young Tom Holland about films whilst working on their film Captain America: Civil War. It was revealed that Tom Holland had told the director duo that he hadn't watched the original Star Wars trilogy, so he didn’t really have any idea what he was referencing in his breakout scene as Peter Parker. Stunned by this, the director duo reiterated how they reacted saying, "We adore Tom, but I’ll tell you, getting to know Tom, Tom is a young man. He is a very young man. (Empire Strikes Back) is twice his age. We’ve since gotten him to invest some of his time watching some older films, hence the Pizza Film School. Holland needed to go to Pizza Film Schoo.”

Anthony Russo further added saying, "I have to tell you, I actually got really excited when he said he hadn’t seen it because the idea was so novel to me and unexpected. I was like, ‘This is fantastic.’ Tom is a guy whose sensibilities we really admire and value, and it’s like, ‘Oh my God, we get to tap into his sensibilities and they’re unaffected by Star Wars.’ I’m like, ‘What is that? What does that mean?’ I was very excited by that.” Tom Holland Confirms An 'Absolutely Insane' Spider-Man 3 Starts Shooting This July.

The directors later mentioned that they have certainly "busted his chops" enough and that Holland by now has certainly watched the original Star Wars trilogy.

(The above story first appeared on LatestLY on Jun 29, 2020 09:08 PM IST. For more news and updates on politics, world, sports, entertainment and lifestyle, log on to our website latestly.com).