Ryan Gosling Birthday Special: From Blue Valentine to Half Nelson, 5 Performances of the La La Land Actor That are Unmissable

In his recent performances, Gosling gave a stellar performance in Damien Chazelle's musical La La Land and later also worked with the same director for the Neil Armstrong biopic titled First Man. As the actor turns 39, here's looking at some of his best roles. 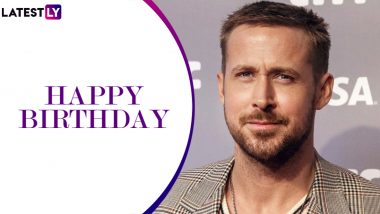 One of the internet's favourite gifs featuring an actor giggling is the one with Ryan Gosling from Crazy Stupid Love. Gosling is one of those actors who rose above his 'pretty boy' image and made the audiences take him seriously as an actor. Over the years, Gosling has performed in some of the biggest films that earned ample of critical as well as box office acclaim. The actor's breakout role though remains to be The Notebook, where he successfully played Noah,  the charming, brooding character with immense ease. Happy Birthday Ryan Gosling! 10 Pics That Prove The Actor Is A Monday Thirst Material.

In his recent performances, Gosling gave a stellar performance in Damien Chazelle's musical  La La Land and later also worked with the same director for the Neil Armstrong biopic titled First Man. As the actor turns 39, here's looking at some of his best roles.

1. Lars And The Real Girl

In a quirky look donning a moustache, Gosling played an introverted and uncomfortable Lars Lindstrom, a delusional young man who begins a relationship with a blow-up doll. It was amazing to see someone like Gosling who is forever charming to take up a role that had him act all awkward with women.

This 2006 film earned Gosling his first-ever Academy Award nomination in the Best Actor category. He played the role of a junior high teacher with a drug habit in it. With such roles, Gosling proved that he is capable to take on heavier roles.

Gosling's performance as a man whose marriage is falling apart in the indie drama is beyond amazing. The film traces the journey of a couple going from an exciting romance to the eventual break-down of their marriage several years later. Ryan Gosling to be a Part of Thor: Love and Thunder? Fans Speculate About His Character After Spotting Him With Director Taika Waititi.

Gosling's role in George Clooney's political thriller was brilliant. Despite a cast consisting of Clooney, Philip Seymour Hoffman and Paul Giamatti, Gosling managed to give a stand-out performance.

Gosling stepped into the shoes of the first man to walk the moon. As Neil Armstrong, the actor managed to tap into the familial life of the astronaut very well. Gosling tapped into Armstrong's emotional state of mind after losing a child extremely well and even though the film did not receive any accolades, the actor did receive a lot of praises for his performance in the film.

Gosling is one of those few actors who has been able to break away from his 'chocolate boy' image quite early on in the career. We hope to see him take on more challenging roles and continue to entertain us the way he has in his films so far.

(The above story first appeared on LatestLY on Nov 12, 2019 11:00 AM IST. For more news and updates on politics, world, sports, entertainment and lifestyle, log on to our website latestly.com).