Shazam! Fury of the Gods: 5 Things We Would Like To See in Zachary Levi’s Next DC Outing 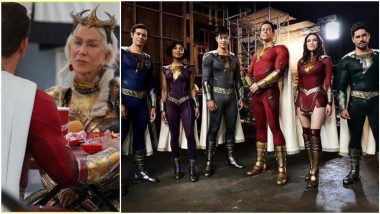 Shazam! Fury of the Gods: 5 Things We Would Like To See in Zachary Levi’s Next DC Outing

Recently, the director of Shazam! Fury of the Gods, David F Sandberg revealed on his Instagram the new look for the Shazam family as all of them received updated suits. First revealed in the first Shazam, while the suits looked accurate to that from the comics, they received a bit of criticism for looking too muscle-padded which in turn just made the physicality of the actors look a bit fake. Shazam! Fury of the Gods: David F Sandberg Reveals First Look of the Superhero Costumes Before They Get 'Leaked'!

With the reveal of the new suits, it looks like they took the feedback from fans and cut down the padding in the suit, and made them look more flashy and aesthetic in order to evoke their appeal. They look slick and a great improvement over the previous suits showing that they did listen to some of the fan criticism. So with yesterday’s reveal of the new suits, here are five things that we would love to see in Zachary Levi’s Shazam! Fury of the Gods.

Diving Deeper into the Greek Mythology

With the previous Shazam film touching slightly on Greek mythology, as our titular superhero’s powers are based on that of the Greek gods, we would love to see the story dig deeper into Greek mythology. With Helen Mirren playing Hespera the daughter of Atlas and Lucy Liu playing Kalypso, it does seem like that it will be delving a bit deeper into the Greek lore. That would be a great concept to be explored in Shazam! Fury of the Gods as the Greek mythology has just been tiptoed around in the DC Extended Universe.

In the mid-credit scene for Shazam! We see Sivana being thrown into a jail who is then greeted by a talking caterpillar, who proposes an alliance hinting that there is something more in play over here. Seeing Mark Strong return in the role would be great considering the fact that Sivana is a huge part of Shazam’s rogues' gallery.

Cameos from other DC Heroes

At the end of Shazam!, we got a rather interesting cameo of another DC superhero, with the only catch being that we couldn’t see the face. That superhero being Superman, we would love to see Shazam! Fury of the Gods reference to other superheroes from the DC universe as it would help in developing the universe more and as a fan, would just be a good piece of fan service for us.

While the story of Shazam is of course that of Billy Batson, we would love to see more of the time spent with the extended Shazam family including Billy’s foster siblings. Since this is a sequel we would love to see more grand set pieces with them as they work together as a team and get to do more things, because if there is one criticism for the first Shazam! The film, it would be how lackluster some of its fights were.

A Reference to Black Adam

Black Adam was originally teased in Shazam! And he is getting his own film as well where the character will be played by Dwayne “The Rock” Johnson as it showcases his origins and is set to release next year. With Black Adam being his Shazam’s arch-nemesis, we would love to see there be a setup for him that could hint towards a showdown between the two characters in the future. Shazam! Fury of the Gods is scheduled to release on June 2, 2023.

(The above story first appeared on LatestLY on Jun 22, 2021 04:54 PM IST. For more news and updates on politics, world, sports, entertainment and lifestyle, log on to our website latestly.com).