Alfred Molina is all set to return as Doctor Octopus in Tom Holland starrer Spider-Man 3! The fil will also feature Zendaya, Tony Revelori and Jacob Batalon. 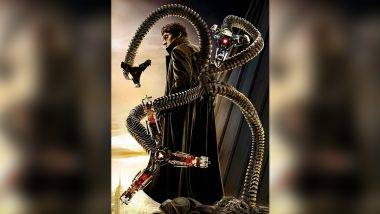 Alfred Molina is all set to return as Doctor Octopus in Tom Holland starrer Spider-Man 3! The fil will also feature Zendaya, Tony Revelori and Jacob Batalon. Alfred had essayed the role of the evil Doctor Octopus in Spider-Man sequel that was helmed by Sam Raimi. And now he is all set to reprise the role in the third instalment of this blockbuster superhero film. He had played the role of a rogue scientist with sheer brilliance. Movie buffs are going gaga ever since the news of Alfred’s return in Spider-Man 3 has hit the internet! Tom Holland Begins Shooting for Spider-Man 3 in Atlanta (Watch Video).

Besides being thrilled to watch Alfred Molina as the charming yet cunning Otto Octavius back in the Spider-Verse, the movie buffs will also see the return of many other actors. It reportedly includes Tobey Maguire, Andrew Garfield, Kirsten Dunst and Emma Stone. Fans would also get to watch Jamie Foxx as Electro and Benedict Cumberbatch as Doctor Strange in Spider-Man 3. The Spider-Verse crossover is touted to be an epic one! Doctor Strange and Spider-Man Meet Again, Benedict Cumberbatch All Set To Join Tom Holland's Spider-Man 3.

Spider-Man 3 is helmed by Jon Watts, who has earlier directed Spider-Man: Homecoming and Spider-Man: Far From Home. The makers are eyeing to release the film on December 17, 2021!

(The above story first appeared on LatestLY on Dec 09, 2020 11:19 AM IST. For more news and updates on politics, world, sports, entertainment and lifestyle, log on to our website latestly.com).