Now, fans are in for a treat as one of the biggest characters from the franchise may be returning for the last part and we can't keep calm. 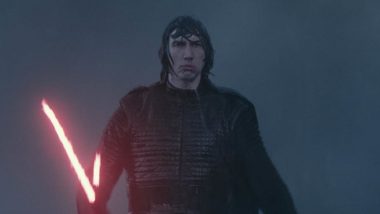 The last part of JJ Abrams' Star Wars trilogy, Star Wars: The Rise Of Skywalker is almost here. The film is set to release over Christmas and the excitement among fans of the franchise is extremely high. The film is the ninth film in the franchise but the finale to Daisey Ridley and Adam Driver's The Force Awakens. The trailers and promos of the films have already been a hit with the audiences and we recently heard that the film is eyeing about $200 million in its advance bookings itself. Now, fans are in for a treat as one of the biggest characters from the franchise may be returning for the last part and we can't keep calm.  Star Wars: The Rise of Skywalker Final Trailer: Daisy Ridley's Rey Sets out on a Mission to Fight a War and End a Beautiful Era (Watch Video).

The new TV spot released shows us Driver's Kylo Ren in the Sith temple and you won't believe whose voice also makes an appearance in this clip. We hear James Earl Jones' voice and it seems like one of the most iconic cinematic villains, Darth Vader is back. But is it really possible considering we have seen Vader die, like definitely die? Not just Vader but also Palpatine and Snoke join in and we hear the lines, "I have been every voice you have ever heard inside your head.” For the uninitiated Darth Vader also happens to be Ben Solo aka Kylo Ren's grandfather.  Star Wars: Episode IX Teaser: Ian McDiarmid’s Emperor Palpatine Returns and Daisy Ridley's Rey is Determined to Fight Him (Watch Video).

Fans are going crazy over this new clip and several new fan theories are now doing the rounds on the internet including the one that suggests that it is in fact Palpatine who is using Vader's voice to control Ren. This is undoubtedly one of the most interesting clips when it comes to the upcoming Star Wars films and is sure to leave them with a lot of questions. Well, we will get all our answers once the film hits the screens on December 20, 2019.

(The above story first appeared on LatestLY on Dec 13, 2019 10:44 AM IST. For more news and updates on politics, world, sports, entertainment and lifestyle, log on to our website latestly.com).