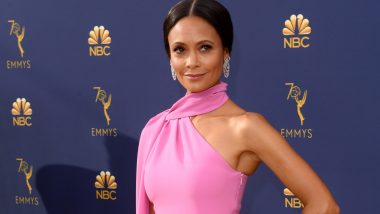 Tom Cruise has been in the industry for long now and is one of the most respected and liked actors in Hollywood. We have heard ample of stories about the actor doing some incredibly sweet gestures for his co-stars but his Mission Impossible 2 co-star, Thandie Newton had a rather strange thing to say as she spoke about her experience of working with Cruise. In a recent interview with New York Magazine, Newton opened up abut starring alongside Cruise and called him "very dominant". Mission: Impossible 7 Star Tom Cruise Smartly Escapes the Mandatory 14-Day Self-Isolating Quarantine Rule After Reaching UK, Here’s How.

The actress recalled a particular incident on set where she was scared and felt insecure. She said, "I was so scared of Tom. He was a very dominant individual. He tries super hard to be a nice person. But the pressure. He takes on a lot. And I think he has this sense that only he can do everything as best as it can be done." Newton recalled how during a scene rehearsal, Tom asserted, "I’ll be you. You be me". While the actress agreed that he was trying to help out, she found his way "Unhelpful". Speaking about what she felt during the shoot, Thandie was quoted saying, "It just pushed me further into a place of terror and insecurity. It was a real shame. And bless him. And I really do mean bless him, because he was trying his damnedest."Mission Impossible 7: Tom Cruise Is Eager to Shoot in Italy Once COVID-19 Restriction Ends.

Newton further revealed how Cruise's behaviour on set had made her second guess herself. She also stated how Tom had later instead of apologising, called her to say they'll have to reshoot portions. Thandie wasn't a part of the rest of the Mission Impossible films and told New York magazine that she “was never asked” to return for 2006’s Mission: Impossible III.

(The above story first appeared on LatestLY on Jul 08, 2020 10:08 AM IST. For more news and updates on politics, world, sports, entertainment and lifestyle, log on to our website latestly.com).