The Matrix Resurrections: Korean Poster Confirms Priyanka Chopra is Playing Sati; Know All About This Character Who Was Also in The Matrix Revolutions 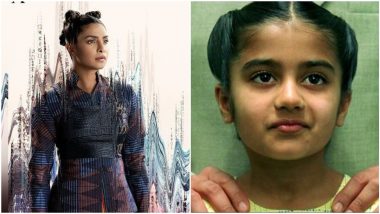 Priyanka Chopra's presence in the upcoming The Matrix Resurrections has already been given heavy coverage, with the actress appearing in the trailer and also getting a poster. But which character she was playing hadn't been confirmed yet. There were theories that she could be the newer version of the Oracle, played by the late Gloria Foster, in the original Matrix trilogy. Others were of the opinion that Priyanka would be playing the adult version of Sati, played by Tanveer K Atwal, in The Matrix Revolutions. The Matrix Resurrections: Priyanka Chopra Drops Her Stunning First Look Poster From Keanu Reeves-Starrer.

Looks like Priyanka is definitely playing Sati, as confirmed by the Korean poster of her character for The Matrix Resurrections. While the English posters avoided mentioning what character she would be playing in the movie, the Korean poster shared by the Insta handle of Warners Bros Korea slipped out the name of PeeCee's character, as you can see below (a little Google Translate would help).

So who is Sati? If you have watch the 2003 film The Matrix Revolutions, the third film in the original trilogy that was directed by the Wachowski siblings, Sati is a program, the child of two other programs (don't ask!) of Indian ethnicities. Keanu Reeves' protagonist Neo first meets her and her family in during the subway train sequence in the opening act.

Watch the Video below:

As a program, Sati was seen as an 'exile', someone without a purpose. However, the Oracle sneaked her into The Matrix know that she would serve a major influence in the network ahead in the future, and thus becoming Neo's responsibility to bring her back when she is kidnapped by the Smiths. The Matrix Resurrections: Priyanka Chopra Jonas Is All Smiles As She Poses With Co-Stars Jessica Henwick And Yahya Abdul-Mateen II.

In the end, after Neo beats Agent Smith in the Matrix but dies in the real world (his body is taken away by the Machines), we see a new dawn in rebooted Matrix. Sati and Seraph (Collin Chou) meet The Oracle in a park, where Sati has created a beautiful sunset for Neo.

Interestingly, Oracle tells Sati that she would meet Neo in the future, and it looks like her words are finally coming true. As to how Sati would influence the resurrected Neo in The Matrix Resurrections to remember his past remains to be seen. As per theories, she would be the new Oracle in the rebooted Matrix.

Watch the Trailer of The Matrix Resurrections:

(The above story first appeared on LatestLY on Nov 30, 2021 05:33 PM IST. For more news and updates on politics, world, sports, entertainment and lifestyle, log on to our website latestly.com).