The Marvel Cinematic Universe's Spider-Man, Tom Holland confirms that the shooting for his much-awaited movie Uncharted has finally begun. 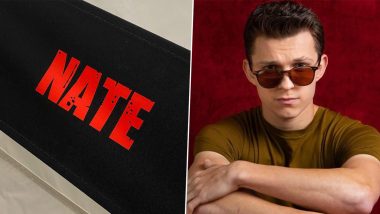 The coronavirus pandemic has brought the entire world to a standstill wherein even the entertainment business is not spared. One of the examples of the same can be Tom Holland's upcoming film Uncharted whose filming was stopped back in March due to the crisis. Well, now looks like after the scenario across the globe is slowly and steadily getting back to normal, the makers of Uncharted have a piece of good news for fans. As The Marvel Cinematic Universe's Spider-Man, Tom just confirmed that the shooting for his much-awaited movie has finally begun. He shared the same update on his Instagram. Tom Holland Gets Back to Work, Shares a Video of Getting Tested for COVID-19 Pre-Shoot (View Post).

Holland took to IG and posted a photo of a chair which reads the name of his character from Uncharted - 'Nate'. He captioned the post as, "Day one #uncharted.' Earlier to this, a video of the actor has gotten viral on Twitter which saw him going through a COVID-19 test. Reportedly, it was because he had to soon start filming for Uncharted. FYI, the film is adapted from a video game. Tom Holland Nominated Jake Gyllenhaal and Ryan Reynolds to Take the Shirtless Handstand Challenge and Here's What Happened! (Watch Videos).

With this fans of the flick can breathe a sigh of relief as finally, it's happening! Helmed by Ruben Fleischer, Uncharted sees a terrific ensemble cast comprising of Tom Holland (Nathan Drake), Mark Wahlberg, Antonio Banderas, Sophia Ali and Tati Gabrielle. Reportedly, this Sony Pictures' big-screen adaption is to arrive in theatres in the second half of 2021. Stay tuned!

(The above story first appeared on LatestLY on Jul 15, 2020 06:35 PM IST. For more news and updates on politics, world, sports, entertainment and lifestyle, log on to our website latestly.com).