Venom - Let There Be Carnage Trailer: From Cletus Kasady To Shriek, 5 Hints About the Plot We Got From New Promo of Tom Hardy's Film!

The trailer gives us a better look at Carnage and dishes out some more plot details that we should expect from the sequel. So here are five hints that we got about the plot from Venom: Let There Be Carnage’s brand new trailer. 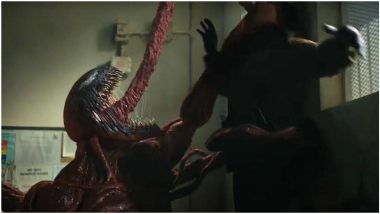 Venom: Let There Be Carnage had a brand new trailer just debut and delivers more on the “Carnage” aspect of the film. A sequel to 2018’s Venom, Venom: Let There Be Carnage sees the return of Tom Hardy as Eddie Brock. Eddie is managing to reignite his career as a journalist while simultaneously getting used to Venom. The movie will also give us the live-action debut of Cletus Kasady aka Carnage who will be played by Woody Harrelson. You can check out the trailer down below. Venom 2 - Let There Be Carnage Trailer: Tom Hardy's Anti-Hero Meets His Biggest Rival in Carnage And It's Mayhem Thereon (Watch Video).

The trailer gives us a better look at Carnage and dishes out some more plot details that we should expect from the sequel. So here are five hints that we got about the plot from Venom: Let There Be Carnage’s brand new trailer.

The sequel will continue to develop Eddie and Venom’s relationship. The first scene from the trailer suggests that Venom is growing frustrated with Eddie’s attitude towards him and is growing hungrier by the day. It looks like this will be a massive plot point between the dynamic of Eddie and Venom. Considering how the chemistry between them is what made the first Venom worth watching, it’s great to see the filmmakers give it more focus here.

We got our first tease to Cletus Kasady in the post-credits scene for Venom, and it looks like the plot established there is being utilised here in full force. Cletus asks Eddie to interview him and tell his story for he finds a connection with him. What’s the exact connection that Cletus is talking about is still not clear, but it’s definitely interesting.

The origin for Carnage over here seems to be tweaked. Rather than Cletus being gifted the Symbiote, it looks like after tasting Eddie’s blood the Symbiote takes a hold of him. Plus it even gives us a hint towards Cletus’ cannibalistic tendencies which shows that filmmakers aren’t holding back with portraying his sadistic nature. Venom Let There Be Carnage Trailer: Tom Hardy’s Venom to Take On Woody Harrelson’s Vicious Carnage in This Crazy Spidey Spinoff! (Watch Video).

In a blink and you will miss it scene, we even get a short glimpse at Shriek who will be played by Naomie Harris. What role she has in the movie still remains to be a mystery, but it surely has us excited.

Anne Weying played by Michelle Williams also sported a ring in the final scene of the trailer. It leads to a hilarious scene between Eddie and Dan, where Venom forces Eddie to punch him in the face.

One thing that this movie really has us excited for is the showdown between Venom and Carnage, and from a few glimpses, it looks like the movie will definitely deliver on that. Taking place in a church we can see Venom being scared of Carnage which sells him as this threat that you should be afraid of. Those few scenes have us really excited for the film, and we can’t wait to watch it.

Venom: Let There Be Carnage is scheduled to release in theatres this fall.

(The above story first appeared on LatestLY on Aug 03, 2021 08:51 PM IST. For more news and updates on politics, world, sports, entertainment and lifestyle, log on to our website latestly.com).