Patty Jenkins was the original choice to helm Chris Hemsworth's Thor: The Dark World but the director decided to exit the project. 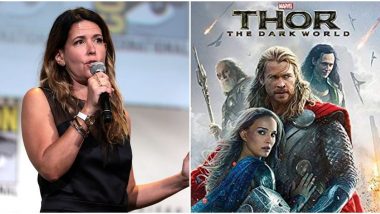 For the ones who don't know, Patty Jenkins was Marvel's original choice as the director of Thor: The Dark World. Yea, we know the movie is probably considered as the worst in the history of MCU movies and if the fans ever decide to have a debate on it, there won't be anyone on the opposite side. The movie that starred Natalie Portman with Chris Hemsworth was then completed by Alan Taylor, however, he couldn't justify the movie, as well as Taika Watiti, did for Thor: Ragnarok. Coronavirus Effect: Gal Gadot's Wonder Woman 1984 Gets Delayed by Two Months, Will Now Hit the Screens on August 14, 2020.

While Jenkins hopped on to DC to direct Gal Gadot's Wonder Woman - a film that gave DC a boost of confidence after multiple failures, she recently opened up about her decision to quit Thor: The Dark World and why she's grateful about it today. The filmmaker apparently, didn't have enough faith in the movie's script and she felt she wouldn't be able to make a good film out of it.

"I did not believe that I could make a good movie out of the script that they were planning on doing. I think it would have been a huge deal, it would have looked like it was my fault. It would’ve looked like, ‘Oh my god, this woman directed it and she missed all these things’. That was the one time in my career where I really felt like, do this with another director and it’s not going to be a big deal. And maybe they’ll understand it and love it more than I do. You can’t do movies you don’t believe in. The only reason to do it would be to prove to people that I could. But it wouldn’t have proved anything if I didn’t succeed.  I don’t think that I would have gotten another chance. And so, I’m super grateful," she elaborated in her conversation with BGR. Captain Marvel Meets Wonder Woman! Brie Larson and Gal Gadot Share Selfies.

Jenkins was definitely not the only director to quit Marvel over creative differences. Earlier Edgar Wright was supposed to direct Ant-Man but they decided to part ways for having different visions of the film. Ava DuVernay was the original choice for Black Panther director but she had a similar experience and finally,  Scott Derrickson who was supposed to helm Doctor Strange and the Multiverse of Madness. While the director wanted to make an out-and-out horror film in MCU, Kevin Feige was clearly against his idea and hence the director had to exit the universe.

(The above story first appeared on LatestLY on Mar 26, 2020 09:26 AM IST. For more news and updates on politics, world, sports, entertainment and lifestyle, log on to our website latestly.com).