Zack Snyder's Justice League teaser was released in August, but was later taken down from Youtube over concerns of music infringement. But now, the director will be taking fans in on a trailer breakdown on November 17. 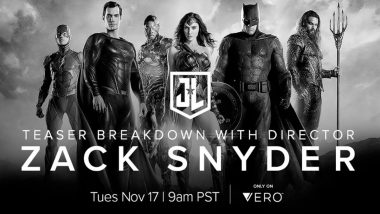 After what we can only call trials and tribulations, the Zack Snyder cut of Justice League is all set to drop on HBO Max in 2021. The project, popularly known as the Snyder Cut, will be shown as a 4-part mini-series, which will later on be compiled as 2 two-hour movies. A teaser for the same was also released in August, but was later taken down from Youtube over concerns of music infringement. Zack Snyder's Justice League Trailer Pulled Down From YouTube by HBO Max Over Music Rights.

However, worry not, for the director will be taking fans in on a trailer breakdown on November 17. The announcement was made on Vero's Twitter and also shared by many Justice League fan pages. Justice League Snyder Cut Trailer: Zack Snyder Reveals Promo of His Version and His Darkseid at DC FanDome and Hallelujah, It Looks Good! (Watch Video).

And this announcement let to '#ZackSnydersJusticeLeague' making it to the top trends on Twitter overnight.

Today Is Indeed The Day:

Trailer Breakdown It Is:

Of Course We All Want To:

Excited Is An Understatement:

Zack Snyder had helmed the DCEU for Warner Bros, which included films like Man of Steel, Batman v Superman: Dawn of Justice and Justice League. However, half-way through the last movie, a tragic personal loss led to Zack making an exit from the project and Avengers director Joss Whedon stepped in to complete the film. However, Zack Snyder fans were disappointed when Whedon changed the former's version of the movie. This led to a huge campaign demanding a 'Snyder Cut', which was finally announced in February 2020.

(The above story first appeared on LatestLY on Nov 17, 2020 09:38 AM IST. For more news and updates on politics, world, sports, entertainment and lifestyle, log on to our website latestly.com).