Apart from them, Cristiano Ronaldo became the highest-earning celebrity. He made Rs 11.9 crore from each sponsored post and secured the first spot. His name has been followed by Dwayne Johnson and Ariana Grande who are ranked second and third respectively. 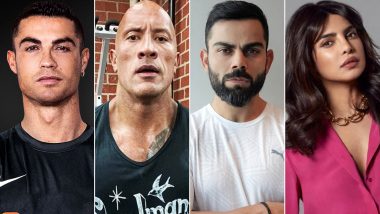 Instagram is a huge platform for anyone and everyone to share pictures and videos Celebrities often use this platform to talk to their audience and promote their work. These celebrities also do paid promotions on Instagram and a list of the highest-paid celebrities is curated to find out which celeb charges what amount of money for these posts. Virat Kohli & Co Could Play Intra-Squad Games Before IND vs ENG, 1st Test At Durham: Reports.

Instagram Richlist 2021 was unveiled recently, and Priyanka Chopra and cricketer Virat Kohli became the only two Indians in the top 30 on Hopperhq.com’s Instagram Rich List 2021. According to the data, Priyanka earned around Rs 3 crore per post, while Virat earned approximately Rs 5 crore with each post. PeeCee is at the 27th position on the list while Kohli is at the 19th rank.

Apart from them, Cristiano Ronaldo became the highest-earning celebrity. He made Rs 11.9 crore from each sponsored post and secured the first spot. His name has been followed by Dwayne Johnson and Ariana Grande who are ranked second and third respectively. Ariana's earns Rs 10 crore per post, Dwayne meanwhile make 11.3 crores. Other celebrities who featured in the list were Kylie Jenner, Kim Kardashian, Selena Gomez, Lionel Messi, Beyonce, Kendall Jenner, Justin Beiber and more.

On the work front, Priyanka has an interesting lineup of projects in the pipeline including- the spy series 'Citadel', 'Text for You', 'Matrix 4'. She will also be seen in an Indian wedding comedy with Mindy Kaling, which she will co-produce and feature in. She recently visited her newly opened restaurant 'Sona' in New York and treated fans with glimpses of food and exquisite decor at the venue. Victoria’s Secret Makes Priyanka Chopra and 6 Others High-Profile Women Its Ambassador in Major Rebranding Bid.

As for Virat Kohli, our team might have lost the World Test Championship 2021 finals against New Zealand but Kohli and team are now trying their level best to win the five-match Test series against England. They lost to New Zealand by eight wickets.

(The above story first appeared on LatestLY on Jul 01, 2021 08:16 PM IST. For more news and updates on politics, world, sports, entertainment and lifestyle, log on to our website latestly.com).