He was born on the 1st of May, but his birth year happens to be a cause of discretion between the fans and family. Today is his 99th birth anniversary, given his birth year was 1919. 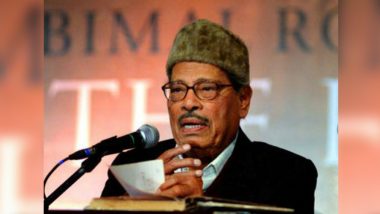 Manna Dey was undoubtedly one of the best singers we had in Bollywood industry. The singer's real name was Prabodh Chandra Dey and he hailed from Kolkatta. He was born on the 1st of May, but his birth year happens to be a cause of discretion between the fans and family. Today is his 99th birth anniversary, given his birth year was 1919. But his family has registered his birth year as 1920. So there has been a confusion if it his centenary celebrations or not! Manna Dey Birthday Special: 5 Beautiful Hindi Songs of the Legendary Singer That You Must Listen to If You are a Music Lover

Manna Dey's daughter and son-in-law (Deb) have said he was born a year later and provided the late singer's passport to submit evidence of their claim. They had moved to the court in Bengaluru to seek an injunction on conducting of any event that misrepresents the birth year. So the Bengaluru City Court ordered a temporary injunction restraining the Manna Dey Sangeet Academy from organising any centenary celebrations or conducting any other event or programme by falsifying Dey’s date of birth. “We have also written to Wikipedia to make the corrections on Manna Dey’s page that mentions his birth date as 1919. His passport clearly states that he was born in Kolkata on May 1, 1920. A bust of the singer installed in Alipurduar also mentioned the same year on the inscription. He opened a bank account in 2008 where he himself mentioned 1920 as his birth year. No state government anywhere in India is beginning the centenary celebrations this year,” the Debs family said to the Times of India.

And looks like the singer's connoisseurs and fans were not aware of the injunction order. Gautam Roy, founder-secretary of Manna Dey Sangeet Academy had written a book on him and while figuring out the horoscope there was confusion over his birth year. But the Manna Dey Sangeet Academy will go ahead and conduct the centenary celebrations while the Deb family will begin them from next year.

(The above story first appeared on LatestLY on May 01, 2018 11:32 AM IST. For more news and updates on politics, world, sports, entertainment and lifestyle, log on to our website latestly.com).