Oscars 2021: Suriya’s Soorarai Pottru Only Indian Film Among The 366 Feature Films In Contention For Best Picture For 93rd Academy Awards

The Academy Awards has released the list of 366 feature films that are eligible for Best Picture and among them is Suriya’s Soorarai Pottru, the only Indian film. 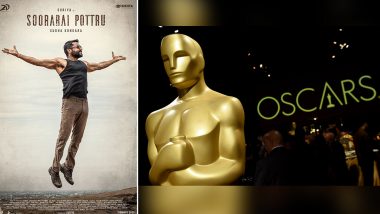 The 93rd Academy Awards ceremony will honour the best films released between January 1, 2020, and February 28, 2021. It was in June last year when The Academy had announced its postponing the event from its originally scheduled date owing to coronavirus pandemic, thereby extending the eligibility period for feature films. Now The Academy Awards has released the list of 366 feature films that are eligible for Best Picture and among them is Suriya’s Soorarai Pottru, the only Indian film. Soorarai Pottru: Suriya’s Drama Movie Enters the Oscars Race, Made Available in the Academy Screening Room.

It is indeed a proud moment for team Soorarai Pottru and for all Indian Cinema lovers too. Owing to COVID-19 situation, The Academy has also given relaxation in terms of criteria for films in Best Picture category. About it The Academy issued a statement that read, “To be eligible for consideration under rules provisions implemented for the 93rd Academy Awards year only, feature films may open in a commercial motion picture theatre in at least one of six US metropolitan areas: Los Angeles County; the City of New York; the Bay Area; Chicago, Illinois; Miami, Florida; and Atlanta, Georgia, by February 28, 2021, and complete a minimum qualifying run of seven consecutive days in the same venue. Drive-in theaters open nightly are included as qualifying commercial venues in the above cities.”

It further stated, “Films intended for theatrical release but initially made available through commercial streaming, VOD service or other broadcast may qualify if the film is made available on the secure Academy Screening Room member site within 60 days of the streaming/VOD release or broadcast.  Feature films must have a running time of more than 40 minutes.” 2021 Oscars Shortlists: Jallikattu Fails To Advance In Best International Feature Film Category; A Look At Shortlists In 9 Categories For The 93rd Academy Awards.

Soorarai Pottru, directed by Sudha Kongara, starred Suriya and Aparna Balamurali in the lead. The film had released directly on Amazon Prime Video on November 12. The nominations for the 93rd Academy Awards will be announced on March 15. Oscars 2021 will be held on April 25 and will be televised live on ABC.

(The above story first appeared on LatestLY on Feb 26, 2021 01:05 PM IST. For more news and updates on politics, world, sports, entertainment and lifestyle, log on to our website latestly.com).