The film will be joining under the General Category in Best Actor, Best Actress, Best Director, Best Original Score & other categories! Rajsekar also informed that the film was made available in the Academy Screening Room yesterday on Republic Day. 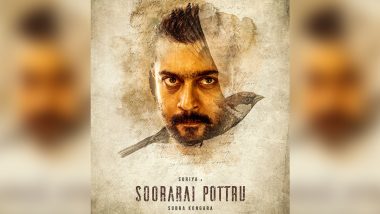 Suriya starrer Soorarai Pottru was amongst the first few films that took the OTT route and released the film online during the pandemic. The makers premiered the film on Amazon Prime Video on November 12, 2020 and got a great response from the audience. Suriya who essayed the role of Nedumaaran Rajangam in the film was applauded for his amazing acting skills. The film created quite a buzz during its release and is now once again in the headlines for becoming a part of the Oscars race. Soorarai Pottru First Look: Suriya’s Fit and Fab Physique Leave Fans Impressed, Sudha Kongara Directorial to Release in Summer 2020.

Producer Rajsekar Pandian took to Twitter to make the massive announcement yesterday. The film will be joining under the General Category in Best Actor, Best Actress, Best Director, Best Original Score & other categories! Rajsekar also informed that the film was made available in the Academy Screening Room yesterday on Republic Day. Based on a true story, Soorarai Pottru chronicles the story of Captain Gopinath, and a retired Army captain, who established budget airline Air Deccan.

In Soorarai Pottru, Nedumaran Rajangam accomplishes his dream of starting a budget airline for people coming from all classes. The film also starred Aparna Balamurli, Mohan Babu and Paresh Rawal in pivotal roles and was directed by Sudha Kongara. The film was backed by Rajsekar Pandian's 2D Entertainment and was co-produced by Sikhya Entertainment. Google Year In Search: Dil Bechara, Soorarai Pottru, Tanhaji – Here Are The Top 5 Movies Searched In 2020 In India!

While this is a great news, the race to the nominations is far fetched. Soorarai Pottru has only been made available in the Academy Screening Room. This means that the film will need several votes to cross several rounds and finally make it to the nominees' list. The screening submission is a paid service provided by the authorities. Any filmmaker from across the globe can avail this service and submit their projects for screening. A fee of $12,500 including the cost of watermarking is levied and the film is then submitted for scrutiny.

(The above story first appeared on LatestLY on Jan 27, 2021 07:41 PM IST. For more news and updates on politics, world, sports, entertainment and lifestyle, log on to our website latestly.com).