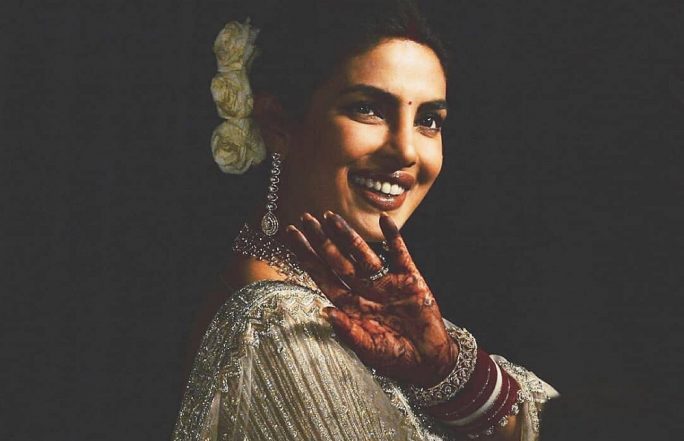 Priyanka Chopra and Nick Jonas got married in Jodhpur a few days back and the couple looked really happy. We saw Nick get teary eyed as he watched ladylove Priyanka walk the up to the aisle. It was indeed a royal affair with a white wedding and a colourful Punjabi wedding taking place at the Umaid Bhawan palace. The festivities were colourful and everyone in attendance seemed to have a gala time. In typical Bollywood style the couple hosted a grand sangeet ceremony where near and dear ones performed for the couple. Priyanka and her mom too put up a Kathak dance act for everyone and we hear Nick won extra brownie points for performing to Bollywood numbers. Desi Girl also showed everybody her cool moves at this do.

Now that the Indian wedding festivities are over, we hear that the couple will also get married in Los Angeles. Amidst all this, fans are wondering if the actress will change her name post marriage to Nick. Priyanka had already formed a team with Nick's brothers' partners and had captioned a picture of Sophie Turner and her as the Jonas sisters. Now we wouldn't be surprised if the Quantico babe rechristens herself and becomes Priyanka Chopra Jonas or then even continues to be called by her maiden name. Astro numerologist, Sanjay B Jumaani suggests what's best for the actress.

Jumaani had predicted that the actress will tie the knot after she truns 36, almost 13 years ago and now the astro-numerologist has some special advice for Priyanka. According to Sanjay, "The name Priyanka Chopra unfortunately won’t auger well for her married life. It adds to a number that indicates ‘treachery & deception caused by members of the opposite sex’." He continues, "But if she adds her married surname and spells as Priyanka Chopra Jonas, it shall add to a number denoting success and honour."

As per Sanjay Jumani, Priyanka Chopra Jonas will prove to be lucky for the actress, "This number is regarded as fortunate and extremely favourable. It is symbolized as ‘the Sun’ and is called ‘the Prince of Heaven.’ It is a number promising happiness, success, esteem and honour, and promises success in one’s plans for the future." Also see: Here’s Why Priyanka Chopra’s Mehendi ‘Disappeared’ During Her Christian Wedding

Jumani feels that the couple is indeed made for each other although he feels Jonas should,"be weary of her dominating, straight forward and impulsive nature". And yes, "Both, Priyanka and Nick are water and earth signs respectively. Hence, they're made for each other. Just like earth and water, that always stay together. They have a lot in common too. For instance, Nick adds to '2', whereas Priyanka Chopra and her nickname 'PC', both add to '2'."

It all began as a fierce song & dance competition between the families but ended, as always, as a huge celebration of love. Nick and I were looking forward to the Sangeet (musical evening), another pre wedding ritual.. and to see what each side had put together. And what a performance it was. Each family telling our stories through song and dance, filled with lots of laughter and love. We were both filled with gratitude for the effort, the love and the laughter and will carry the memories of this special evening for the rest of our lives. It is an amazing start to a lifetime of togetherness for our families and friends...#grateful @nickjonas /: @calebjordanlee @josevilla @josephradhik

We will have to wait and find out if Priyanka will officially sign off as Mrs Jonas in the coming days? Or will the actress like Deepika Padukone and Anushka Sharma continue holding on to her maiden name?

Once upon a fairytale... @nickjonas Link in bio @people

Watch this space for more...