This is not the first time that the actor Thalapathy Vijay has sparked a controversy. 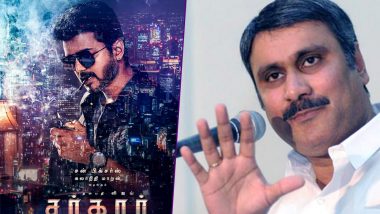 Kerala, June 22:  South Superstar Thalapathy Vijay turns a year older today! The actor is celebrating his 44 birthday and wishes from fans have poured from across the nation but, former health minister Dr Anbumani Ramadoss has shammed him in his tweets for promoting smoking in his upcoming film poster 'Sarkar'. The poster for his new film was launched on Thursday.

In one of his tweets, Ramadoss said that he looks more stylish without a cigarette. In another tweet, he also accused the actor of promoting smoking and lectured him about how smoking is injurious to health and one of the reasons which cause cancer.

Soon after the poster was released many praised him for his looks, but former Minister pointed him about the wrong message he is giving to the society especially to his fans and shammed him for being so irresponsible.

Shame on Actor Vijay for promoting Smoking in this first look of his next movie.#ActResponsibly #DoNotPromoteSmoking

Reportedly, this is not the first time that the actor has sparked a controversy. Earlier too, the south superstar Vijay was in the news for his film Mersal that took jibe on the ruling government. The film dialogues led the uproar, with the BJP members also demanding the film to be banned and sought an apology from the actor for same.

In a similar move, South Superstar Rajnikanth was also criticised for smoking beedi on screen in his 2002 drama Baba.

(The above story first appeared on LatestLY on Jun 22, 2018 02:21 PM IST. For more news and updates on politics, world, sports, entertainment and lifestyle, log on to our website latestly.com).