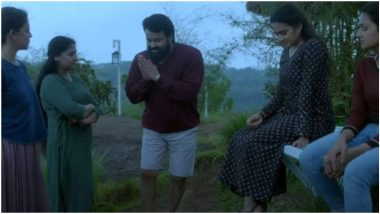 12th Man marks the third collaboration of director Jeethu Joseph and Malayalam superstar Mohanlal after Drishyam and Drishyam 2. And if you are a fan of their past two collaborations, 12th Man may not on the same league as the other two films, but it doesn't disappoint either. In fact, when the film gets to its form, 12th Man is an enjoyable twisty murder mystery that takes its inspiration from a 2018 Korean movie Intimate Strangers. The movie also stars Unni Mukundan, Sshivada, Anusree, Anu Sithara, Saiju Kurup, Rahul Madhav, Aditi Ravi, Priyanka Nair, Leona Lishoy, Anu Mohan, and Chandhunadh. 12th Man Movie Review: Mohanlal Turns Desi Hercule Poirot in Jeethu Joseph's Twisty Murder-Mystery That Keeps You Guessing Till the End.

12th Man revolves around a group of friends, four couples and two singles, who go to a resort to celebrate the engagement of one of the single friends. His fiancee also joins them in their trip. During the dinner, they play a game that spills out some very personal secrets, after which a couple of the friends end up fighting. Soon after, one of them is found dead and while the others think it of as an accident, it is soon revealed that it could be a murder. Mohanlal plays a guest at the resort, who turns out to a cop and he interrogates all the suspects in one room, and deduce the killer by the end of the night a la Hercule Poirot.

So how does he do it? In this special feature, we deconstruct the finale of this mystery thriller and explain why the killer did what he or she did, and why the reveal worked. Needles to say, HUGE SPOILERS ahead.

Shiny (Anusree), the victim and the bipolar afflicted wife of Mathew (Saiju Kurup) has been playing her own games since it came out in the open that Sidharth (Anu Mohan) bought abortion pills for an unidentified lady in their group. It turns out that Sidharth was innocent, and he had actually bought it for Jitesh (Chandhunath). Jitesh has been having an affair with Merin (Anu Sithara), wife of Sam (Rahul Madhav), and it was for her that he got the abortion pills. However, she refuses to heed Jitesh's request to confess in front of Sidharth's fiancee Aarathy (Aditi Ravi). When Merin confesses to what happened to Shiny, the latter sees this as an opportunity to make money and pay off her husband's debts (and distance him from his BFF Fida). She gets Rs 5 lakhs each from Jitesh and Merin.

Since she cannot take the fall herself, Shiny tells the pregnant Annie (Priyanka Nair) to do so. It is revealed that Shiny has a video capturing the extra-marital affair between Annie and her husband Zakariah's (Unni Mukundan) friend. It is left for the viewer to figure out if the child that she is carrying is of her husband's or not. Shiny has been blackmailing her from some time using the video, and though she later deleted it, as Annie is unsure of it, Shiny once again blackmail her to take the fall. Annie, however, refuses to do so and leaves her near the point where Shiny is found dead.

While Annie, Merin, Jitesh, Fida and even Mathew prove to be major suspects, it turns out the killer has been Merin's husband Sam. Without Merin's knowledge, Sam had turned her account into a joint one (how I have no clue), and therefore any transaction that she does, he gets the notification. So when Merin transfers Rs 5 lakhs to Shiny, he is intrigued (why he never got notification for Merin receiving the money from her brother is never explained). Instead of questioning his wife and oblivious of her infidelity, he chooses to follow Shiny, and after Annie storms away from their spat, goes on to confront her.

Shiny, who isn't liked by most in the group (who are clueless of her mental issues) taunts Sam and then even mocks about Merin's cheating. In anger, he shoves her and she ends up falling to her death. It wasn't a premeditated murder but more of a crime of passion, but it's still a closed deal for Sam when it comes to the police

Why the Reveal Works

Despite the limited number of suspects, it isn't easy to deduce Sam as the obvious culprit, because we know right from the start that he is shady and corrupt and a cheat (keeping his phone on flight mode during the game is quite the red herring), but deceives us into thinking that makes him acquitted of the murder. Chandrashekara  (Mohanlal) finds out about his illegal bank dealings, and we, like him, think that's the worse case about this man, and looked out for the killer in the other unassuming suspects. So Sam, despite being the biggest criminal of the bunch, gets the chit earlier because his 'minor crimes' shaded him from the murder.

How Chandrashekar Traps Him

When Chandrashekar goes through Sam's messages, he gets suspicious about his lawyer's message for him. Chandrashekhar chats with the lawyer through Sam's phone, and the lawyer who is oblivious of whom he is chatting with reveals the fact that Sam needed an alibi for where he was at the moment when Shiny was found dead. That, along with the discovery that he made Merin's account into a joint savings without her knowledge, put Sam in the corner. Drishyam 2 Movie Review: Mohanlal’s Sequel to His Blockbuster Family Thriller Is Loaded With Pulpy Surprises.

It is funny when you go back and remember that Fida and Nayana's dinner table game, which started all this trouble, would never have happened if Sam hadn't kept leaving the table to answer his nefarious calls. If only he could have just kept his shady dealings away from dinner for at least a couple of hours, the night would not have taken such a drastic turn and he would just have remained a criminal banker and not the murderer of his friend's wife!

So what do you think of 12th Man? Share your thoughts in the comments section below. 12th Man is streaming on Disney+ Hotstar.

(The above story first appeared on LatestLY on May 21, 2022 10:31 AM IST. For more news and updates on politics, world, sports, entertainment and lifestyle, log on to our website latestly.com).