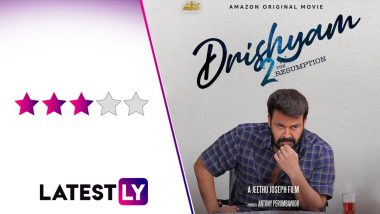 Drishyam 2 Movie Review: When Drishyam 2 was announced, the first question that came to my mind, naturally, was this - WHY? The first film had a perfect ending, and the one big aspersion we had for the sequel is that if it ruins that brilliant climax. In the 2013 film Drishyam, Jeethu Joseph had created a very engaging, if not perfect, thriller. But the crime pulled by his protagonist Georgekutty (Mohanlal), to protect his family from an unintentional murder they committed, was seen nothing less than perfect. Drishyam 2 Movie: Review, Cast, Plot, Trailer, Streaming Date and Time of Mohanlal, Meena's Film Releasing on Amazon Prime Video.

Georgekutty might have saved his family and we think they have a happy ending, but the first film ended with idea that they have to live with the fact that they have to keep looking over their shoulders. The sequel is set six years later, a period that should have allowed Georgekutty and his family to lose their fears and be over-confident about being scot-free. Which is exactly what their opponents want.

Also, we all are familiar with the saying 'there is nothing called as a perfect crime'. When Drishyam 2 begins, we actually go back to that night when Georgekutty furtively buried the body of her daughter's molester under the flooring of the under-constructed local police station. In that opening scene itself, we realise that he didn't pull off a perfect crime. I am not spoiling anything for you here, but I wasn't very happy that there was this flaw that we never realised before. Maybe because like many other fans of this movie, I was still in awe off how Georgekutty, an ordinary man with no proper schooling, uses his ingenuity (supplanted by his love for movies) to pull the most cunning crime coverup. So seeing that he missed a loophole felt annoying.

We then move forward six years after that incident, and find that Georgekutty and his family have put it at the back of their mind, but not shut it down completely.

They are now more well-off than they were in the first film. He is now a theatre-owner, but continues his old cable operating business. Georgekutty is also planning to produce a film based on his story, much to the consternation of his wife Rani (Meena), who is annoyed that he has taken up drinking and have spent lakhs for his movie. However, their rise in prosperity have also caused their once-supportive villagers to now cast doubts on their past.

The elder daughter Anju (Ansiba Hassan) is in college, and is still not over the trauma of that incident, suffering from episodes of epilepsy. The younger daughter Anumol (Esther Anil) is at a boarding high school and is smarter and brasher than when we saw her last. But they still wince in fear when a police jeep crosses their paths, and for all the right reasons.

What they pulled off six years ago is seen as an humiliating failure for the police, especially since the dead boy is the son of the former IG Geetha Prabhakar (Asha Sarath). The cops are waiting for Georgekutty's family to drop their shields, and we are as well, to see if Time has made our shrewd protagonist a victim of his own confidence.

Watch the Trailer of Drishyam 2:

The original Drishyam, while a huge blockbuster, was criticised for trying to glamourise a crime. With certain copycat crimes being reported in real life, that accusation continued to stick to the movie in the later years. Drishyam's handling of the police interrogation scenes also drew flak. Another accusation for the film was that it was inspired by a novel The Devotion of Suspect X by the Japanese author Keigo Higashino. Let's also not forget the fact that Jeethu Joseph has been struggling to pull off a big success since Drishyam. Drishyam 2: Missed Watching the Original? Let Mohanlal Recap the Thrilling Story of Georgekutty and His Family Before You Check Out the Sequel on February 19!

So why am I mentioning and collating these random callbacks and observations in this previous para? Like every single thing Georgekutty does in Drishyam 2, they all play their parts in how the sequel turns out, as the narrative has the director trying to tackle the past criticisms. Including his flailing attempts to fit in with the New Wave Malayalam cinema.

So does Drishyam 2 manage to pull off a fantastic comeback for Jeethu? For all his ambitions, Drishyam 2 isn't as cohesive as the first film. The first half, especially, struggles in its pacing and occasionally, stilted performances from a couple of supporting actors who have important roles in the film. However, when I recalled these portions, once done with the whole film, I had this feeling that the languorous pace and the irreverent editing were deliberate. Especially the scenes that portrayed Georgekutty's new professional ambitions. Each moment has its value later on - even the fact why he still owns that cable TV office despite earning better money in theatre business.

Still it takes the first big twist-reveal near the mid-point for Drishyam 2 to pick up, and it, thankfully, never lets go off the speed. From hereon, I started to enjoy the familiar terrain Drishyam 2 ventures into, as the dots go on to connect themselves. Fans of the original film would not be disappointed with how Drishyam 2 continues the investigative plotline and how it presents fresh troubles for Georgekutty's family. Saying more would just ruin the fun!

While Jeethu Joseph's writing and direction aren't as assured as we had seen in Drishyam, they are still the main assets that make Drishyam 2 credible enough. The pulpy twists and turns are fun to watch, but they do risk tethering towards the point of disbelief, and occasionally crossing it. Jeethu, who like Georgekutty owned the foresight of seeing this criticism coming, tries to plug it with a very meta explanation, which is upto you to buy. Or not. For humoring the man's earnest efforts of not letting down the legacy of the first film, I was game for the first.

The best part I liked about Drishyam 2 is how it writes Georgekutty as a character. We already know that he is a man who is willing to go to any length to protect his family, and now, we realise this facet will also be his curse. We are sure that even with the fresh troubles cropping up, Georgekutty has an ace or two hidden up his sleeve. But we now get to know that they come at a terrible cost. As one character puts it, his punishment is that he has to always be on his toes. Drishyam 2 reminds us that there is no court more hurtful than a man's own conscience.

I was, however, disappointed with the writing around Georgekutty's family members' parts, as they felt more like chinks in his perfect armour that threaten to break it apart. Especially when the film shows how it is Rani who swirls the problematic cauldron for her family. Showing her to be this dumb robs the character of her own standing. Also, what was up with the subplot of a former criminal called Jose and his family woes? Yes, he has a part to play in the main storyline, but after giving so much footage to the character, he is suddenly booted out of the film!

Coming to the performances, Mohanlal's act comes across as a strange oddity, though. In the beginning, I found the superstar's performance to be uneven and not easily flowing, unlike in the first film. The second half is where he becomes more flexible, paralleling the turn of fortunes for Georgekutty. I believe that Lalettan was pulling off a Verbal Kint here - that stiffness is more of a controlled assurance that spills out in the form of the film's many surprises in the third act.

Among the supporting cast, Murali Gopy as the new investigating officer, a returning Asha Sarath and Siddique, playing her pacifist husband, are really good. The song "Ore Pakal" leaves a mark.

- The Engaging Second Half

- Not In The Same League

In a nutshell, if Drishyam is Kireedam, then Drishyam 2 is its Chenkol - a sequel that may not be warranted or of the same quality, but judiciously continues the storyline to its appreciable conclusion, without feeling like an aberration. Drishyam 2 is streaming on Amazon Prime Video.

(The above story first appeared on LatestLY on Feb 19, 2021 10:54 AM IST. For more news and updates on politics, world, sports, entertainment and lifestyle, log on to our website latestly.com).