30 Years Of Bobbili Raja: Venkatesh Daggubati Goes Down the Memory Lane and Shares the Classic Posters of His Film 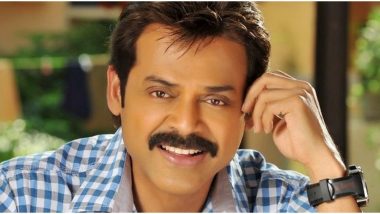 Southern superstar Venkatesh Daggubati went down memory lane on Monday and recalled the shoot of the 1990 film, Bobbili Raja. Venkatesh shared a few posters of the film on Instagram. He mentioned that the film, which was directed by B. Gopal has completed 30 years since its release. 3 Years Of Arjun Reddy: Vijay Deverakonda Fans Celebrate the Intense Romantic Drama by Sharing Their Favourite Moments from the Film

Alongside the image, he wrote: "A trip down memory lane. Today marks 30 years since Bobbili Raja! We've all come a long way since then! So thanks to everyone who has contributed to the success of this amazing movie." Rana Daggubati Celebrates 34 Years of Victory Venkatesh in the Telugu Industry With a Special Post!

A trip down memory lane 😇 Today marks 30 years since Bobbili Raja! We’ve all come a long way since then! So thanks to everyone who has contributed to the success of this amazing movie 🙏❣️🎉

The film marked the debut of Venkatesh's co-star, late actress Divya Bharti. "Bobbili Raja" revolves around a man, who tames an aggressive daughter and her mother. Venkatesh was last seen in the films "F2: Fun and Frustration" and "Venky Mama".

(The above story first appeared on LatestLY on Sep 14, 2020 07:50 PM IST. For more news and updates on politics, world, sports, entertainment and lifestyle, log on to our website latestly.com).