The Malayalam version of Andhadhun featuring Prithviraj Sukumaran, Mamata Mohandas, Unni Mukundan and Raashi Khanna has been titled as Bhramam. The film is helmed by Ravi K Chandran. 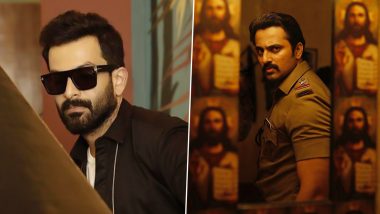 Andhadhun, co-written and directed by Sriram Raghavan, is a National Award-winning film that starred Tabu, Ayushmann Khurrana and Radhika Apte in the lead. The film also featured Anil Dhawan, Ashwini Kalsekar and Manav Vij in key roles. The film is being remade in Tamil, Malayalam and Telugu languages. The Malayalam version featuring Prithviraj Sukumaran, Mamata Mohandas, Unni Mukundan and Raashi Khanna has been titled as Bhramam. Prithviraj Has Been Reportedly Roped In to Play Ayushmann Khurrana's Role in Andhadhun's Malayalam Remake.

The makers of Bhramam have released Prithviraj Sukumaran and Unni Mukundan’s looks from the upcoming Malayalam film. The latter would be stepping into Manav Vij’s shoes who had essayed the role of Inspector Manohar Jawanda in the original film. And Unni can be seen in the avatar of a police officer who is looking into the mirror. Yesterday, Prithviraj’s look was also released in which he is seen sporting casual avatar and a pair of black sunglasses. He would be seen stepping into Ayushmann Khurrana’s role, who is a great pianist and fakes being blind. Andhadhun Malayalam Remake: Mamta Mohandas And Ahaana Krishna To Play The Female Leads In Prithviraj Sukumaran Starrer?

Directed by Ravi K Chandran, the shooting of the film is currently taking place in Fort Kochi and the cinematography is also handled by the filmmaker. Jakes Bejoy, who has composed music for Ranam, Queen, Taxiwala, among others, has been roped in to compose the music of Bhramam.

(The above story first appeared on LatestLY on Feb 17, 2021 11:00 AM IST. For more news and updates on politics, world, sports, entertainment and lifestyle, log on to our website latestly.com).