Andhadhun Malayalam remake will be directed by Ravi K Chandran and lead actor Prithviraj Sukumaran is expected to start shooting for the film by end of January. 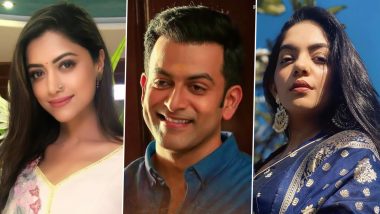 Andhadhun is a National Award-winning film that starred Tabu, Ayushmann Khurrana and Radhika Apte in the lead. Directed by Sriram Raghavan, Ayushmann essays the role of a pianist, who fakes being blind to improve his piano skills. Now the actor who is set to step into Ayushmann’s shoes in the Malayalam version is Prithviraj Sukumaran. Yes, Andhadhun is being remade in Malayalam and reports are rife that Mamta Mohandas and Ahaana Krishna are being considered to play the female leads. Prithviraj Sukumaran Has Been Reportedly Roped In to Play Ayushmann Khurrana's Role in Andhadhun's Malayalam Remake.

Talking about the film’s puja ceremony and star cast, a source revealed to TOI, “The movie’s pooja will be held in Ernakulam on January 27. Prithviraj and Mamta Mohandas are confirmed and another young Mollywood star is also part of the film.” However, the makers are yet to make an official announcement on the same. Andhadhun Malayalam remake will be directed by Ravi K Chandran and lead actor Prithviraj Sukumaran is expected to start shooting for the film by end of January. About the shooting schedule the source mentioned, “Even the January 27 date is a bit tentative as so many other matters have to fall in place and that too very soon.” Andhadhun Remake: Tamannah Bhatia Opens up about Reprising the Role of Tabu in the Telugu Version.

Watch The Trailer Of Andhadhun (Hindi) Below:

Besides the Malayalam version, Andhadhun is also being remade in Tamil as Andhagan with Prashanth and Simran in the lead. The blockbuster Hindi film is also getting a Telugu remake with Nithiin and Tamannaah as the lead actors.

(The above story first appeared on LatestLY on Jan 21, 2021 10:49 AM IST. For more news and updates on politics, world, sports, entertainment and lifestyle, log on to our website latestly.com).