Adithya Varma starring Dhruv Vikram and Banita Sandhu in the lead, is the remake of the Telugu film Arjun Reddy, which was a blockbuster. This Tamil film is helmed by Gireesaaya, who is making his directorial debut. 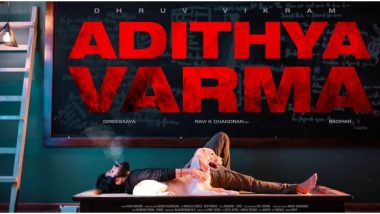 Dhruv Vikram and Banita Sandhu have been roped in as the lead pair of Adithya Varma. Fans were impressed seeing their chemistry in the trailer. Since a few days there were speculations doing rounds on its release date. It was said that the film might get postponed as the censor board has not issued a clearance. All the doubts are now cleared as the makers have confirmed that Adithya Varma will now release on November 21, 2019. Adithya Varma: Dhruv Vikram - Banita Sandhu Starrer to NOT Release on November 8?

Adithya Varma, the Tamil film, was initially scheduled to hit the big screens on November 8. Now the censor board has not only issued the certificate, but the release date has also been confirmed. The film has received an ‘A’ certificate. Ever since the statement has been issued by the makers, fans have started to trend on Twitter using the hashtag #AdithyaVarmaFromNov21. Adithya Varma Trailer: Dhruv Vikram and Banita Sandhu's Toxic Love Tale Looks To Be A Worthy Remake of Arjun Reddy! (Watch Video).

Adithya Varma is produced under the banner of E4 Entertainment. The statement read, “We at E4 Entertainment with great pride announce the release of the much anticipated love story of the year Dhruv Vikram’s Adithya Varma worldwide from 21st Nov 2019. The film has been granted an A certificate. The entire cast and crew have put their hearts and souls together to make sure Adithya Varma lives upto your expectations. Fall in love yet again in theatres all over the world on Nov 21st.”

Here’s The Update On Adithya Varma:

Adithya Varma is the remake of the Telugu film Arjun Reddy, which was a blockbuster. This Tamil film is helmed by Gireesaaya, who is making his directorial debut. Stay tuned for further updates from the world of showbiz!

(The above story first appeared on LatestLY on Nov 06, 2019 01:57 PM IST. For more news and updates on politics, world, sports, entertainment and lifestyle, log on to our website latestly.com).