Dhruv Vikram Joins Hands With Mari Selvaraj for a Sports Drama, Pa Ranjith Comes on Board As the Producer

Pa Ranjith, who will be backing the film, confirmed the news and posted a picture with the duo on Twitter. He shared, his excitement to be a part of the film and revealed that this would be his third collaboration with Mari. 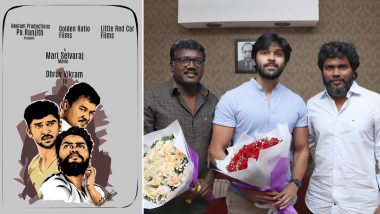 Mari Selvaraj's first film as a director titled Pariyerum Perumal was one of the successful films that released that year. The film made Mari a household name in an instant and his fans were eager to see what the director has to offer in his next project. Within two years of his first film, Mari announced that he will be directing Dhanush in his upcoming film Karnan. The film is yet to reach theatres and while fans wait for that, the filmmaker has announced his next project. Karnan: Makers of Dhanush’s Film with Mari Selvaraj Release Title Look on the Actor’s 37th Birthday.

The director has joined hands with actor Dhruv Vikram for a sports drama based reportedly on Kabaddi. Pa Ranjith, who will be backing the film, confirmed the news and posted a picture with the duo on Twitter. He shared, his excitement to be a part of the film and revealed that this would be his third collaboration with Mari. He added that he is sure that his and Dhruv's collaboration will be a successful one.  He went on to thank the team od production banners - Golden Ratio Films and Little Red Car Films for making the collaboration happen.

Talking about Mari Selvaraj's other film Karnan, the film came recently headlined the news when speculations rifed up that the film is based on the Kodiyankulam caste riots. The crew of the film were even threatened to stop shooting in Tirunelveli and Thoothukudi for the same reason. Members of the political party Mukkulathor Pulipadai demanded that the permission for the shoot be cancelled. However, the director went on to clarify that the film is not based on the riots. Chiyaan 60 Poster: Vikram and Son Dhruv Vikram's Gangster Film Gets a Dark, Bloody and Intriguing First Look Tease.

As for Dhruv, he marked his debut with made his debut with Adithya Varma. He now has a film with his father Chiyaan Vikram which is reportedly titled Thiravukol Mandiravadhi. The film is being directed by Karthik Shubraj. The makers have only posted a teaser poster of the film till now and other details about the film are expected to be out soon as well. Touted to be a gangster flick, the film marks Dhruv's first collaboration with his father.

(The above story first appeared on LatestLY on Jan 28, 2021 09:09 PM IST. For more news and updates on politics, world, sports, entertainment and lifestyle, log on to our website latestly.com).