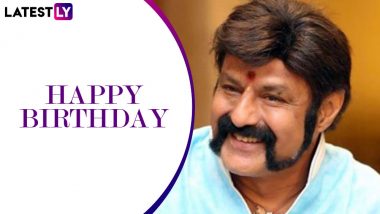 Nandamuri Balakrishna, who is popularly called NBK and Balayyababu by his fans and admirers, turns a year older today (June 10) and birthday wishes have been pouring in for the actor from his fans, colleagues, and wellwishers on social media. The actor, who commands a massive fan following in Tollywood, has captivated the audience with his charm and has established himself as one of the leading contemporary actors of Telugu Cinema. Andhra Pradesh: TDP MLA Nandamuri Balakrishna Assaults Own Party Worker at Vizianagaram Rally, Watch Video

On Monday, many, who have taken to the micro-blogging site to wish the actor a splendid year, who is celebrating his 59th birthday today, got #happybirthdaynbk trending on Twitter. NTR Mahanayakudu Full Movie Leaked by TamilRockers! Nandamuri Balakrishna’s Film Available for Free Download

Balayya Is an emotion❤❤

Only hero whose movies doesn't get affected by Piracy in TFI 🔥 #HappyBirthdayNBK pic.twitter.com/KyOW0cMyac

The Chairman of a renowned Hospital speaking to a Cancer Patient in such a kind way!

#HappyBirthdayNBK behalf of all of our #MegaFans

Wishing you great year filled with good health.. Hope ur will become good don't get frustrated on fans and make yourself as meme.. Good luck#HappyBirthdayNBK pic.twitter.com/VN0JHWGaGh

To the Man Of Masses And One of the inspirational one,who served many through is Cancer Hospital.Happiest Birthday YuvaRatna/NandamuriNataSimham/NandamuriAndhagadu/TheLion

No Other Actor Like Him Didn't Have Mass Fan Base... Except His Harsh Behavior And Speaking Vulgar Word's Towards People He Didn't Have Any Other Bad Qualities... #HBDNBK #HappyBirthdayNBK @Balaya_actor @NBKFilms_ pic.twitter.com/RaNQS5b7FW

On the professional front, Nandamuri Balakrishna was last seen in NTR biopic, which turned out to be a box-office dud. The actor, who has joined hands with Tamil filmmaker KS Ravi Kumar (for the first time) for his upcoming action entertainer, has also signed a project with director Boyapati Srinu. Stay tuned to LatestLY for more updates.

(The above story first appeared on LatestLY on Jun 10, 2019 12:46 PM IST. For more news and updates on politics, world, sports, entertainment and lifestyle, log on to our website latestly.com).