The fans of late Kannada superstar Puneeth Rajkumar were in for a Republic Day treat when the producers of his last movie James released its poster. 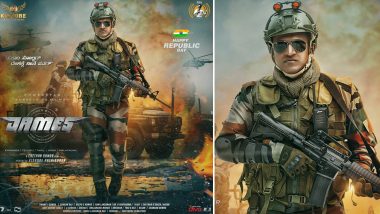 The fans of late Kannada superstar Puneeth Rajkumar were in for a Republic Day treat when the producers of his last movie James released its poster. The poster shows Rajkumar as a soldier getting ready for action. James is the most anticipated movie of the Kannada film industry. Puneeth's brothers, Shiva Rajkumar and Raghavendra Rajkumar, who are also star actors, have made special appearances in the movie. Late Puneeth Rajkumar’s Three New Kannada Movies From His PRK Productions Set to Premiere on Amazon Prime Video.

Puneeth had completed his part of the shoot before his tragic death. Ashwini Puneeth Rajkumar, the late actor's wife, shared the poster on her social media and wished fans on Republic Day. The director of the movie is Chetan Kumar, who's known for action movies in the Kannada film industry. The movie is being made under the Kishore Productions banner. Jr NTR Pays An Emotional Tribute To Late Kannada Actor Puneeth Rajkumar At RRR Press Meet (Watch Video).

Appu as James.. Happy Republic Day to all pic.twitter.com/k08vNxOrIt

The makers are planning to release the teaser and trailer in February. The release of the movie has been planned for Puneeth's birthday on March 17.

(The above story first appeared on LatestLY on Jan 26, 2022 10:44 PM IST. For more news and updates on politics, world, sports, entertainment and lifestyle, log on to our website latestly.com).