Who else is excited for this big trio to come together for Vignesh Shivan's next, Kaathuvaakula Rendu Kaadhal? 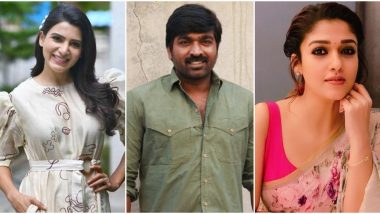 Vignesh Shivan has a perfect Valentine's Day treat for Tamil movie lovers. The director has announced his next venture, a romantic comedy titled Kaathuvaakula Rendu Kaadhal with a stellar star cast that includes Vijay Sethupathy, Nayanthara and Samantha Ruth Prabhu. While we recently heard stories of the Darbar actress collaborating with Samantha, here comes the official confirmation we were waiting for. The movie seems to be a love triangle between the lead trio and we are dying to know more deets about this very interesting project. Thalaivar 168: Nayanthara's Role In The Rajinikanth Starrer Film Revealed!

Kaathuvaakula Rendu Kaadhal sees the team of Naanum Rowdy Dhaan (Anirudh, Nayanthara, Vignesh and Vijay Sethupathi) come together after a gap of five years and Samantha is their newest addition to it. The shooting of the film is expected to begin in the next few months and we can expect a year-end release from the makers. Disha Patani, Samantha Ruth Prabhu and Vaani Kapoor Get A+ for their Fashion Outings this Week -View Pics.

Check out the announcement

Kaathuvaakula Rendu Kaadhal will see Samantha marking her return to the Tamil cinema after last year's highly acclaimed movie, Super Deluxe. The actress was recently seen in Jaanu, a Telugu remake of Tamil movie 96 that starred Trisha and Vijay Sethupathy. Meanwhile, the Vikram Vedha actor is waiting for Vijay's Master to hit the screens and he also has Aamir Khan's Laal Singh Chadha in his kitty. Coming to Nayanthara, she has RJ Balaji’s Mookuthi Amman in the pipeline.

(The above story first appeared on LatestLY on Feb 14, 2020 03:42 PM IST. For more news and updates on politics, world, sports, entertainment and lifestyle, log on to our website latestly.com).