If all goes well, Sanjay Dutt may star in Yash's KGF Chapter 2. 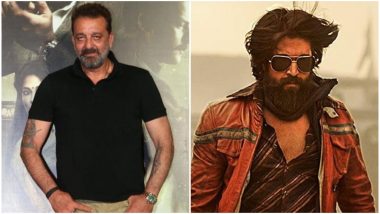 Kannada actor Yash is still busy receiving rave reviews for his latest offering, KGF. The film that was backed by Farhan Akhtar's Excel Entertainment gave some stiff competition to Shah Rukh Khan's Zero and it's great run at the Hindi box office needs no introduction. While the viewers were in awe of this drama set in the dystopian future, makers are keen to relish its success once again. Yes, the work on its sequel is going on in full swing and if all goes well, Sanjay Dutt may be roped in to play the lead antagonist. Yash's KGF Chapter I Becomes Kannada Cinema's First Film To Release in Pakistan - Read Deets.

While this Hindi version of KGF went on to mint Rs 43 crores at the box office, makers realised that having a different set of actors may benefit the project even more. It would further help them get a pan-India release. And who better than Sanjay Dutt to come on board for the same? While the actor's popularity cannot be even, he's also an ideal choice by the makers to play the lead antagonist in a film as huge as KGF. And while you may think if these are mere rumours and the Mission Kashmir actor will no way give his nod, hear the latest confirmation coming from the horse's mouth.

In his chat with Bollywood Hungama, when Yash was asked to confirm the reports of Dutt coming on board for chapter 2, he said, "We had offered him Chapter 1, which he did not accept perhaps for reasons of date availability. But yes, we have offered him Chapter 2 of KGF.” Elaborating on the same conversation, a source close to the portal said, "The only reason he did not accept KGF Chapter 1 was because it was a regional film. And the main lead Yash was unknown outside Karnataka. Now after Chapter 1 is a blockbuster and Yash is a household name across the country, the KGF franchise seems much more attractive to Dutt." And we think it's quite a fair reason. KGF Actor, Yash's Fan Commits Suicide Outside his Residence; Actor Reacts Saying 'This is Not Fandom or Love'.

Recently Farhan Akhtar hinted about chapter 2 going on floors and we believe it's great news. While the craze behind KGF is still going so strong, it's time to go ahead and start working on chapter 2 that will equally interesting and even more intriguing.

(The above story first appeared on LatestLY on Feb 09, 2019 08:57 PM IST. For more news and updates on politics, world, sports, entertainment and lifestyle, log on to our website latestly.com).