Today on the occasion of Raveena Tandon’s birthday, the makers have not only shared her look from the upcoming magnum opus, but even introduced her character as ‘the gavel to brutality’. 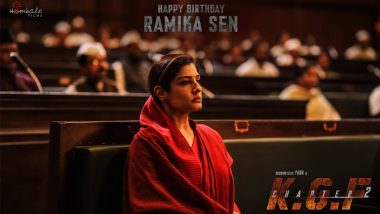 Bollywood beauty Raveena Tandon celebrates her 46th birthday today! It was in February this year when lead actor Yash confirmed that Raveena would be seen playing the character Ramika Sen in KGF Chapter 2. Welcoming her, Yash had shared a post that read, “Ramika Sen may not be welcome to Rocky’s territory.. but Raveena ma’am is definitely more than welcome to Yash’s hometown! It’s a pleasure having you onboard ma’am !! Let’s have a blast.” Today on the occasion of Raveena Tandon’s birthday, the makers have not only shared her look from the upcoming magnum opus, but even introduced her character as ‘the gavel to brutality’. KGF: Chapter 2 Star Yash Introduces Raveena Tandon with a Welcoming Instagram Post.

Raveena Tandon would be seen playing an important role in Prashanth Neel directorial KGF Chapter 2. The first look poster shows her in an intense avatar. Clad in a saree, Ramika who is seen seated amid parliamentary session, looks fierce. While sharing her look, the makers captioned it as, “THE Gavel to brutality!!! Wishing the powerhouse #RamikaSen, @TandonRaveena a very Happy Birthday. #KGFChapter2.” Raveena Tandon Joins The Cast Of Yash's KGF Chapter 2 After Sanjay Dutt.

THE Gavel to brutality!!!

KGF Chapter 2 also stars veteran Bollywood actor Sanjay Dutt as Adheera, the antagonist. This Kannada film produced under the banner of Homable Films will be dubbed in four languages – Hindi, Malayalam, Telugu and Tamil. The makers reportedly are eyeing to release this period action drama by mid-January next year.

(The above story first appeared on LatestLY on Oct 26, 2020 12:09 PM IST. For more news and updates on politics, world, sports, entertainment and lifestyle, log on to our website latestly.com).