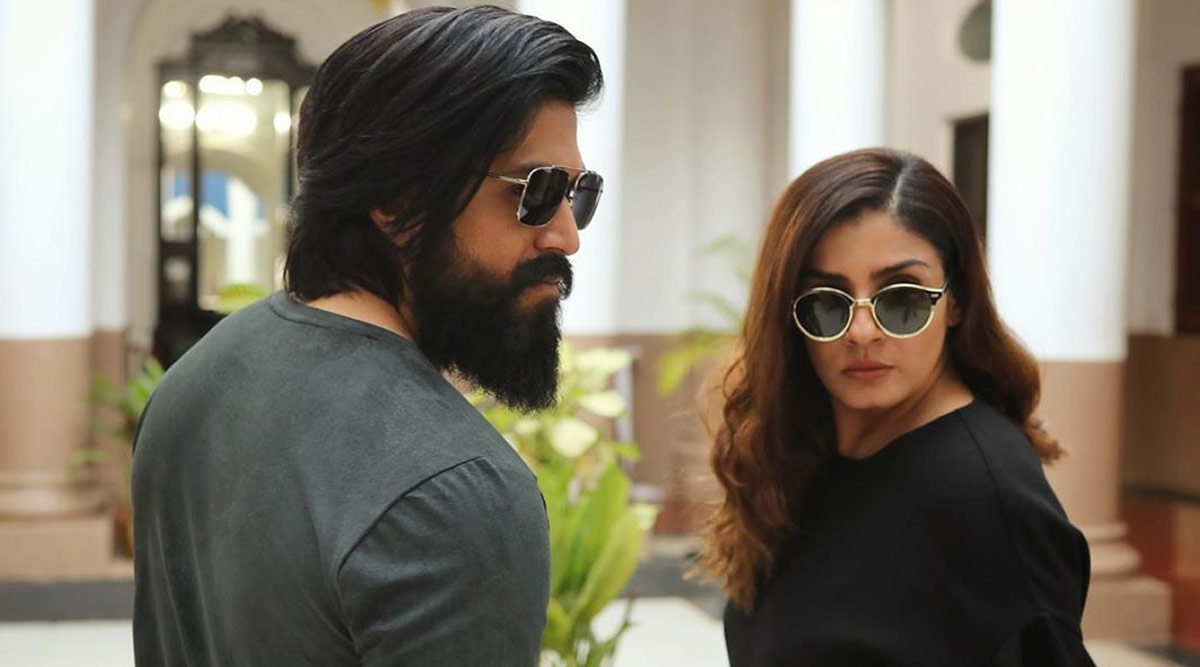 Kannada superstar Yash is super excited to share screen space with Raveena Tandon in the second chapter of KGF. In the film, Raveena will be seen playing the role of a cop Ramika Sen. Welcoming the actress on-board, Yash took to Instagram and wrote: "Ramika Sen may not be welcome to Rocky's territory.. but Raveena ma'am is definitely more than welcome to Yash's hometown! It's a pleasure having you onboard ma'am !! Let's have a blast." KGF: Chapter 2’s Official Teaser Will Not Be Out on Yash’s Birthday, Filmmaker Prashanth Neel Apologises to Fans (View Tweet)

Ravina too shared a post with Yash on her Instagram handle. She uploaded a boomerang video in which they both can be seen giving deadly looks. "When looks can kill.. the 'death warrant' has been signed on," Raveena captioned the post. Commenting on Raveena's post, Yash used a line from the actress's hit song in "Mohra", her 1994 superhit, "Tu cheez badi hai mast". "Yeh warrant cheese hai badi mast mast.. but still needs Rocky's approval so let's stick to looks for now," Yash wrote. Raveena Tandon Joins The Cast Of Yash’s KGF Chapter 2 After Sanjay Dutt.

Ramika Sen may not be welcome to Rocky's territory.. but Raveena Ma'am is definitely more than welcome to Yash's hometown!! 😃 It's a pleasure having you onboard ma'am !! Let's have a blast 👍

And to that, Raveena gave a perfect reply. She also used the hook line of her another hit song "Ankhiyon se goli maare". "Yash your ilaaka, your approval, done. My territory, my rules ! Nahin toh ankhiyon se bhi goli maare," Raveena responded, using a line from another of her superhit songs, from the film "Dulhe Raja". KGF: Chapter 2 will release worldwide in Kannada, Tamil, Telugu, Malayalam and Hindi. The film is a follow-up of the 2018 Kannada blockbuster "KGF: Chapter 1", which starred Kannada star Yash with Tamannaah Bhatia and Ananth Nag.