Raveen Tandon plays a woman who issues death warrants in Yash's KGF Chapter 2. The sequel is getting increasingly interesting, we admit. 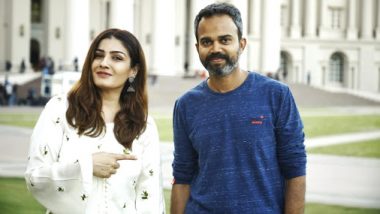 KGF Chapter 1 witnessed a rousing response all over India. The film's box office numbers gave tough competition to the Hindi movies that released alongside it. Soon enough, the sequel to the film was announced and now there are two more additions to it. Sanjay Dutt has already shot a few scenes for the film in Hyderabad and now Raveena Tandon too has been signed for an important role. As per director Prashanth Neel's tweet, she is the lady who will issue death warrants in the film. A death warrant is issued by the court so does she play some higher-up in the Indian Justice system? It could be but in the case of Indian movies, it could also be a metaphor for something more sinister. KGF: Chapter 2’s Official Teaser Will Not Be Out on Yash’s Birthday, Filmmaker Prashanth Neel Apologises to Fans (View Tweet)

Neel smartly gives away a major clue about her character in the film but hasn't bothered to explain too much. After all, something should be left for the movies as well.

The lady who issues the death warrant has arrived!!!

Sanjay Dutt plays Adheera in the film who is a dangerous man with a dangerous set-up, at least that's what Dutt said in an interview.

(The above story first appeared on LatestLY on Feb 09, 2020 01:17 PM IST. For more news and updates on politics, world, sports, entertainment and lifestyle, log on to our website latestly.com).