KGF Chapter 2: Netizens compares Sanjay Dutt’s intense look as Adheera to that with Ragnar Lothbrok from Vikings. Read on. 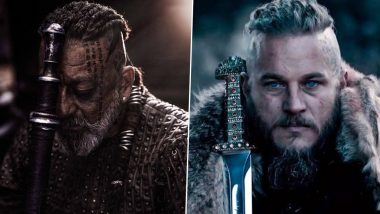 Bollywood actor Sanjay Dutt turned 61 on July 29, 2020. On the occasion of his birthday, the makers of his upcoming film KGF 2 dropped the first look of Sanju baba from the movie. Dutt plays the role of an antagonist named Adheera in the action-drama venture. As soon as the look was out, fans of the actor got excited and how. In the pic, Sanjay can be seen flashing a dark look with braided hairdo and tattoed face. That's not it as the B-townie is also seen holding a metal sceptre in the photo. Even the intense makeup game looks quite strong here. But, as we all know Bollywood has always taken inspiration from the West, Sanjay Dutt as Adheera instantly got compared to Ragnar Lothbrok from Vikings. KGF Chapter 2: Sanjay Dutt Drops a Treat for His Fans on His Birthday, Shares His Deadly Look As Adheera in the Upcoming Action Drama (View Pic).

Twitterverse could not keep calm and started comparing Adheera to Ragnar. Many even posted a collage of the Bollywood and Hollywood star comparing the similarity. A closer look at it and well a little is surely inspired by Ragnar Lothbrok from Vikings. Check out a few reactions on the same below: KGF: Chapter 2’s Official Teaser Will Not Be Out on Yash’s Birthday, Filmmaker Prashanth Neel Apologises to Fans (View Tweet).

Looks like a copy and paste from #Vikings pic.twitter.com/PRsyHnHh94

Am I the only one who notice this?#AdheeraFirstLook #Vikings pic.twitter.com/RIpuQzrBTr

Even The Director Says So!

Ok. Director himself put about this inspiration. Now I got a feeling that there's a #Vikings style execution in the movie. https://t.co/yQIrAx3L3p

Earlier, in interaction with PTI, Sanjay had compared his Adheera's role to Avengers villain Thanos. He had said,"Adheera's character is very powerful. If you have seen 'Avengers', you would know Thanos. So Adheera is like him. He is a very dangerous character with a dangerous get-up. And that's the zone I was looking for." KGF 2 stars Yash in the lead. Stay tuned!

(The above story first appeared on LatestLY on Jul 29, 2020 12:49 PM IST. For more news and updates on politics, world, sports, entertainment and lifestyle, log on to our website latestly.com).