KGF: Chapter 2’s Official Teaser Will Not Be Out on Yash’s Birthday, Filmmaker Prashanth Neel Apologises to Fans (View Tweet)

Here's a piece of sad news for all KGF fans as the official teaser of the film which was supposed to be out on Yash’s Birthday will not release on the said day now. View Tweet. 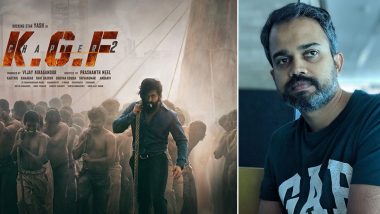 It was just yesterday when we told you how Yash's forthcoming film, KGF: Chapter 2's official teaser will be out on the South sensation's birthday which is on January 8, 2020. But sadly, that's not going to happen. As the director of the film took to Twitter and shared that the teaser release date has been postponed to a later date. The filmmaker in his explanatory tweet expressed how 'the shoot of the film has been pushed till January 6, and the team will be back only on January 7.' And so owing to the same, the teaser of the movie has been delayed. Confirmed! Yash Starrer KGF: Chapter 2’s Official Teaser Will Release on the Actor’s Birthday (Watch Video).

Not just this, director Prashanth Neel in his social media post also apologised to fans and added that they will deliver their best. But fans should not feel disheartened as not a teaser, but the makers have promised to unveil the second poster of KGF 2 on Yash’s birthday at 10.08 am. With this looks like fans need to wait a bit more to see the glance of KGF Chapter 2 and witness a battle between Sanjay Dutt and Yash. Yash-Sanjay Dutt Starrer KGF Chapter 2 First Look to Release on 21 December, Fans Go Crazy With Excitement!

Well, from the moment the teaser release announcement was made online, fans of the star were damn excited to finally see the actor's swag. For the unversed, KGF: Chapter 1 was among the most loved Kannada flick of 2018 and had earned over Rs 300 crore at the ticket window. Now, with the superb buzz around part two of the film, it seems like this one will break all the box office records. Reportedly, KGF 2 is set to hit the silverscreen in July 2020. Stay tuned!

(The above story first appeared on LatestLY on Jan 05, 2020 08:35 PM IST. For more news and updates on politics, world, sports, entertainment and lifestyle, log on to our website latestly.com).