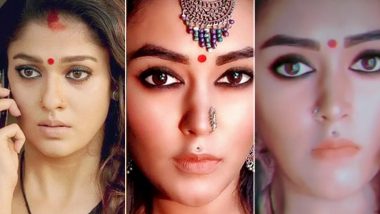 Due to the ongoing India-China face-off, on Monday, the Indian government took a decision and banned in total 59 Chinese apps. The list of the blocked apps is long but it includes some of the most used ones like TikTok, Shein, UC Browser, WeChat and more. Well, as soon as the banned news spread like wildfire on the web, TikTok videos of Nayanthara's lookalike have gone viral on social media. Yep, that's true, the Bigil actress who enjoys a massive following online has a doppelganger. Well, the Tiktoker has updated many videos on Instagram imitating the actress and goes by the account Mithu Vigil. Vignesh Shivan, Nayanthara Turn Kids in this Amusing Video Mocking 'Jokers and their Silly Jokes' To Refute Rumours of Testing Positive for COVID-19.

The South star's lookalike has more than 8k followers on Instagram and one scroll through her account and we bet you'll also get convinced that she is indeed Nayanthara's ditto copy. In a few videos, she can be seen copying the actress and lip-syncing her dialogues from films like Puthiya Niyamam, Naanum Rowdy Dhaan. Riley Knoxx ‘Beyoncé Lookalike,’ Becomes First Openly Transgender Woman to Perform During NBA Halftime Show.

Check Out Her Videos Below:

Here's a bold one:

And just in case you are not convinced, here's a picture of the original diva Nayanthara:

Well, what are your thoughts on this viral lookalike of the South sensation? Talking about South beauty, Nayanthara entered the world of lights, camera and action in 2003 with Malayalam film Manassinakkare. Also, we wonder what would be the actress' thoughts after having a look at her doppelganger? Stay tuned!

(The above story first appeared on LatestLY on Jun 30, 2020 02:38 PM IST. For more news and updates on politics, world, sports, entertainment and lifestyle, log on to our website latestly.com).