Mookuthi Amman is a social entertainer with mythological themes that is directed by RJ Balaji, and NJ Saravanan. The movie stars Balaji himself in the lead, with Nayanthara playing the titular character. Mookuthi Amman is streaming on Disney+ Hotstar. 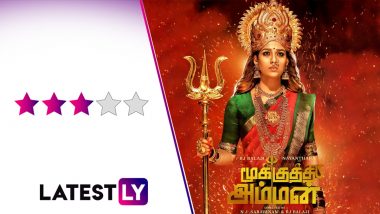 Mookuthi Amman Movie Review: Mookuthi Amman begins with a pertinent question - if we ever have a bad day, people say it is because God is unhappy with us. If that's the case, then why is God turning the other way around when charlatans are making crores and oppressing people in His or Her name? That question is asked by Engels Ramaswamy (RJ Balaji), a report for a local channel who has been trying to expose the fraud activities of Bhagavathi Baba (Ajay Ghosh) in Nagercoil. Mookuthi Amman First Look Out! Nayanthara Looks Divine as a Goddess.

Going by that question, you might think that Engels Ramaswamy, whose name itself is an emulsion of Marxism and religion, might be atheist or agnostic. But, no, he is pretty pious (evident in the very next scene) and so is his entire family, sans a father who abandoned them years ago. His over-exuberant mother (Urvashi) is irked that he can't get a bride and even more embittered by the fact that her every planned trip to Tirupati with her son and three daughters faces some roadblocks on the other.

On the advice of their relative, they visits their family deity, Mookuthi Amman, whose temple is in a derelict condition due to neglect. They spend the night there, and Engels prays to Amman to help him out of his problems. To his surprise, his goddess (Nayanthara) makes an appearance, but she is not there to give him an easy solution out of his miseries. Seemingly affronted by Engels' mother's obsession with Tirupati Balaji, Mookuthi Amman wants him to make her temple as popular as Balaji's. After some hilarious episodes and introspective thoughts on the idea of worship, they manage to do achieve that goal. However, Engels faces a new challenge in Bhagavathi Baba, who hijacks the temple and its premises.

Watch the Trailer of Mookuthi Amman:

Through Mookuthi Amman, Balaji, who also wrote the film and  directed it with NJ Saravanan, makes a social satire on how people have replaced faith in religion with fear, and how they are more attracted the gimmicks and offerings rather than the idea of worshipping a deity. Using the character of Bhagavathi Baba, who looks to be modelled after the fugitive godman Nithyananda, Balaji also gets opportunities to take potshots at how charlatans work. Mookuthi Amman Trailer: Lady Superstar Nayanthara As the Deity in This RJ Balaji’s Massy Entertainer Looks Divine.

Mookuthi Amman, strangely, loses steam when Bhagavathi Baba enters the scene around the interval point. Most of these portions feel very inspired by PK and OMG!, and since they form the crux of the second half, Mookuthi Amman turns a very okay watch in these sequences. That said, the message that the film wants to send across is something that feels like a need of the hour, when divisive politics are being played in the name of religion.

The first half, however, lends a different impression, when the focus is on Engels and his family. The humour, occasionally loud, still works thanks to the actors involved. Balaji makes for a very relatable lead, and takes on a character that doesn't have forced heroism or quirks. But the real-scene stealer is a fantastic Urvashi, who is appropriately OTT and cherubic. She is equally brilliant when she has to be serious, evident in the scene where she confronts her past, with the camera never flinching to cut for a different angle. Or in the other scene, where she talks about how she agrees with her son's description of her being loosu.

Even Engels's scenes with Mookuthi Amman are quite appealing and comical. Nayanthara makes for a very repledescent goddess, dominating the screen with her magnificent charm. At times, I felt her character was a little underused, and at times confusing, which on the hindsight, maybe because she is God. (SPOILER begins) She uses Engels to take on the fraud Baba, but in the end, she herself comes in front of everyone, to solve the situation. If that's how the idea of God works, then why was that never done before? There is a scene where Baba gets the forests around the temple burnt, which kills many of the animals? Why didn't she act then? That's the potential problem of having a Goddess in human form. (SPOILER ends).

While the writing occasionally lets down the film at a few places, Mookuthi Amman still manages to be pleasing thanks to its light-hearted treatment and the performances of Nayanthara, Balaji and Urvashi. Even the actresses who play Engels' sisters are good.

PS: Is it me or does the film's BG score gives a sense of deja vu? Also do not miss out on a sly Easter Egg of Balaji's LKG!

Mookuthi Amman has a relevant message and is also entertaining and hilarious in parts. While it suffers from half-baked writing, the film still makes for a good family entertainer for Deepavali. Mookuthi Amman is streaming on Disney+ Hotstar.

(The above story first appeared on LatestLY on Nov 14, 2020 02:41 PM IST. For more news and updates on politics, world, sports, entertainment and lifestyle, log on to our website latestly.com).