The trailer of Mookuthi Amman is out and going by the looks of it, it has superhit written all over it. Must admit, lady superstar Nayanthara is fabulous in the clip as an Indian goddess. Check it out. 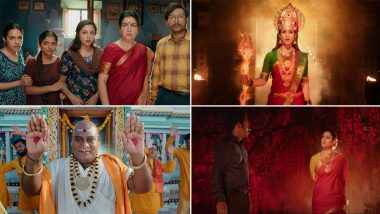 While it was known that the makers of Mookuthi Amman were all set to drop the trailer of their devotional film on the auspicious occasion of Dussehra, however, the time it was supposed to unveil was unknown. Finally, the trailer of Mookuthi Amman is out and going by the looks of it, it has superhit written all over it. Must admit, lady superstar Nayanthara is fabulous in the clip as an Indian goddess. The flick will release on Disney+Hotstar from October 29, 2020. Mookuthi Amman: Nayanthara-Starrer To Release Directly On Disney+ Hotstar and Star Vijay This Diwali.

This is the very first time Nayanthara will be seen in an Amman avatar and must say she will surely make her fans the happiest. From tip to toe, she looks like a goddess and also acts like one. The surprising package in the trailer is RJ Balaji who has also acted alongside the title character Nayanthara. The story of the film revolves around a social message that's apt in today's time. We are impressed and how. New Stills Of Mookuthi Amman Starring Nayanthara and RJ Balaji Take The Internet By Storm! (View Pics).

Helmed by RJ Balaji, Mookuthi Amman indeed looks promising. One of the advantages the film has is that it has a terrific ensemble cast and each is seen playing their part supremely well. So, are you excited to watch Mookuthi Amman this Diwali while chilling at your home? Tell us in the comment section below. Stay tuned!

(The above story first appeared on LatestLY on Oct 25, 2020 03:22 PM IST. For more news and updates on politics, world, sports, entertainment and lifestyle, log on to our website latestly.com).